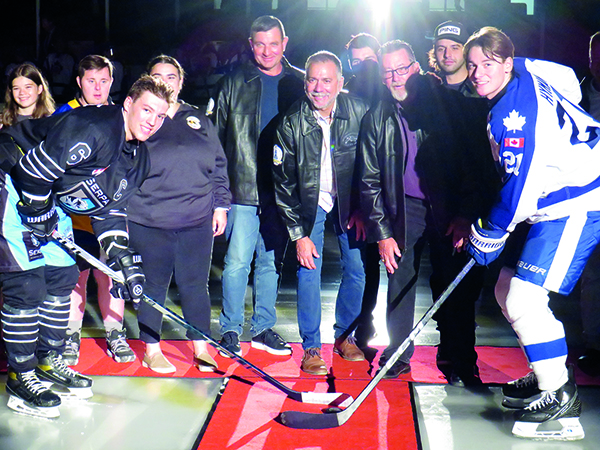 Saturday night's Tigers home opener at the Aurora Community Centre had everything a hockey fan adores: goals, fights and a victory for the home team.

The Tigers, who kicked off their 2022/2023 OJHL campaign last weekend, earned back-to-back victories against the division-rival Markham Royals and both came in overtime.

Last Friday night, on the road in Markham, the Tigers spoiled the Royals' home opener with a 5-4 victory in overtime. The Tigers overturned a 3-1 deficit in the third period. On the power play in overtime, Ryan Evanhuis scored the game winner.

Moving into Aurora this past Saturday night, it was as energetic and wonderful as a home opener should be. Mayor Tom Mrakas dropped the puck in front of both team captains, former Tigers alumni were honoured, and a crowd of over 300 people, packed the house.

All tied up at 1-1 heading into the second period thanks to a goal from Tigers forward Lucas Stanojevic, the Tigers blew the game wide open.

Short-handed, Sett Ursomarzo broke free on goaltender Nguyen William and toe-dragged the Royals netminder to give the Tigers the lead. Zander Hutchinson jammed home the second goal of the period capitalizing on a rebound opportunity.

Despite Royals forward Justin Mauro scoring on the power play, the Tigers were relentless in their approach and Connor Russo jammed home a goal similar to the last one to give the Tigers the edge once again.

The Royals, who were quite scrappy with Tigers players after the whistle, took the liberty of initiating a fight that saw everyone on the ice go at one another. Above all, Tigers defenceman Christian Holden and Royals defenceman Luca Fasciano were ejected from the game.

Once the fights cleared and the game resumed, Royals defenceman Thomas Lonsdale was given a 10-minute misconduct for head contact. On the ensuing power play, Ethan McFarland made it 5-2.

With a commanding lead and a clear advantage, the Royals changed their netminder and came out aggressively in the third.

Brad Barker and Steven Klinck scored twice in the opening two minutes of the period that left many fans in attendance quite uneasy. Cole Cooksey tied it up and Cole Bowditch completely stunned everyone in attendance as the Royals took the lead.

However, the resilient Tigers came to battle and Khaden Henry fired a shot high-blocker side off a face-off past Alexander Chu to tie it all up.

With 22.3 seconds left to go, Tigers netminder Glen Crandall robbed Klinck with an incredible glove save to keep the boys alive.

In double-overtime, captain Connor Van Weelie and Henry went in two-on-one. Van Weelie slid the puck across to Henry to snapped it home to give the boys the win.

After the game, everyone was excited and feeling good, having opened the season with two enthralling victories.

“It was an intense game. Both teams played hard. They obviously had a comeback in the third period and then our boys rallied to get a big win. The guys were excited, getting a big win at home. Obviously, the crowd was incredible. That added that element to the players and they were very excited about that aspect of it, playing in front of a number of family, friends and fans. But overall, very excited, very happy, the start you're certainly looking for to begin the season,” head coach Greg Johnston said when speaking to The Auroran on Monday.

The Tigers acquired Henry from the Royals in the offseason and he tortured his former club.

“Khaden is a special player. He has a high skillset, loves to score goals and produce. A player like that, you certainly don't want to put any reigns on him, but I couldn't be happier with his weekend. He's instrumental in getting us two wins. He played extremely well.”

Following these two victories, Johnston and the coaching staff have a lot of work to do with this group as the season goes along. Most importantly, coughing up three goal leads.

This Friday, the Tigers will be out on the road taking on the Wellington Dukes and will take on the Collingwood Blues on the road this Saturday, in a rematch of last year's first round playoff matchup.

An exciting start for this hockey club and with an excellent showing in fan support, it should be another exciting year in Aurora.