Tigers beat up on Royals, Chargers to bring win streak to four 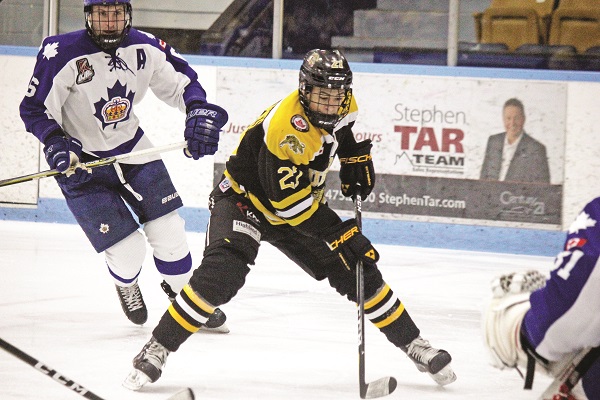 Christmas seems to have come early for the Aurora Tigers.

The Junior A club is currently enjoying a four game win streak since the start of December, one that has vaulted them past the stagnant Markham Royals for second place in the OJHL's North division.

The two teams met on Friday with just four points separating them in the standings, in what can only be described as a beatdown by the Tigers, who took a 3 – 0 lead just over four minutes into the first period.

Six straight goals fired home between the second and third was the icing on the cake of a 10 – 3 win, the first time all season the Tigers have reached the double digit mark.

Austin Eastman and Elijah Gonsalves led the way for Aurora with four points each, while Zach Wilkie, Jake Bricknell, and Brock Welsh added a trio each.

The win brought Markham's cushion to just two points on the Tigers, who had the opportunity to tie the Royals in the standings with a win on Saturday for the first time in over six weeks.

It was the goaltending work of backup Jack Irvine who stole the show in the hosting of the Chargers, who earned his second shutout in a row, a 6 – 0 shutout highlighted by a 28-save performance.

Eastman, who joined the team just two weeks prior thanks to a swap with the major junior Quebec Remparts of the QMJHL, opened the scoring in this one to bring his goal total to three in his first three games.

“Is that kid ever exciting,” said Tigers analyst Kevin Dean. “What a pickup!”

Eastman added two assists to the stat sheet to hit the eight-point mark with the Tigers, while Bricknell added another three point game, as did Evan Bidenti.

Irvine, whose sixth win of the year brought him up to a solid .922 save percentage on the season, highlighted the goose egg with a nice cross-crease toe save on a one-time late in the third period to preserve the shutout.

With five less games played than Markham and five less losses on their record, the Tigers have put themselves in solid position among the NorthEast Conference logjam heading into the holidays. The North-leading Newmarket Hurricanes have slowed their roll recently similar to the Royals, and now sit just four points up on Aurora with two games in hand for the Tigers.

The five-game homestand continues on Friday for the Tigers when they host the division rival Pickering Panthers (15-15-1-2) at the ACC, followed up by a hosting of the lowly Milton IceHawks (1-31-0-2) the following night.

Excerpt: Christmas seems to have come early for the Aurora Tigers.