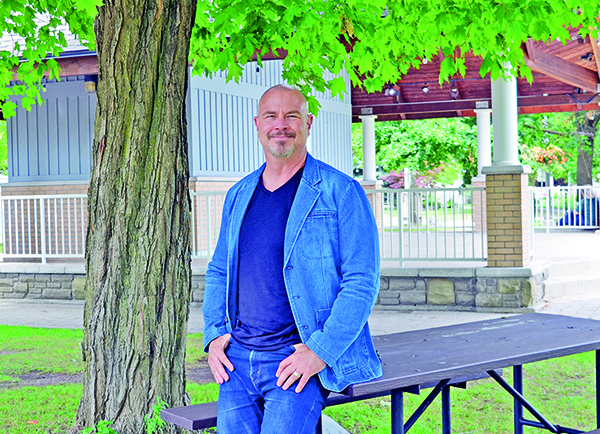 It started as a grassroots initiative to help the most vulnerable people in the community, and 40 years on, Blue Door Shelters has stayed close to its roots in the face of exceptional demand.

As Blue Door Shelters marks its milestone anniversary, they are facing unprecedented demand due to the dual affordability and housing crises, but they remain undaunted in their efforts to raise awareness and advocate for solutions they believe will truly address what is sometimes an invisible problem.

Ahead of Doors Unlocked: A 40 Year Perspective, a community gathering to mark their milestone which is set to take place at Aurora Town Park on Saturday, August 27, at 4 p.m., Executive Director Michael Braithwaite is looking back on the thousands of lives impacted by their work and where they want to be in the future.

“When Blue Door Shelters first got started, it was a community and groundswell of people saying we should do something for the most vulnerable in our community, not really knowing the extent of it,” he says. “In fact, it is only in the last 10 years through point-in-time counts that we're really starting to get an idea of how many people are experiencing homelessness in any given year right throughout the Region.

“It was that groundswell of ‘let's do something, let's look after our neighbours who might not have a safe place to call home' and it has grown to where we have emergency housing for men, families, youth, and now secondary housing for senior men, a program called Inclusion for 2SLBGTQ+ youth, and a social enterprise called Construct. Construct is something [informed by our past] not having success just putting people into any old job with precarious hours that may not pay a living wage; this pays a living wage, it's meaningful work as we desperately need people in the trades.”

Throughout York Region, their Leeder Place shelter serves 15 families each night. Their Porter Place men's shelter offers a place for 30 each day, while Kevin's Place, their shelter for youth, serves 12 each night. Each shelter works in tandem and Blue Door, in turn, has partnered with several community organizations such as Belinda's Place, Inn from the Cold, 360 Kids, LOFT, Yellow Brick House and more to make sure the community is best served.

It's a concerted effort to ensure they're not working in silos, says Braithwaite, and they have found that when they work together they get a lot more done.

But there is still much more work to be done before homelessness can be considered a thing of the past.

When Braithwaite joined Blue Door Shelters three years ago, it was a group he said was primarily focused on emergency housing. It is what they had done since the beginning and had done quite well – but it was also a model, he says, that needed to change.

“We needed to change from just a caretaking perspective to a housing focus to say, ‘You're here, we want to wrap services around you, get you on a housing journey, get you a key to your own front door where you can have friends over for coffee,' and that housing focus change was outside emergency housing,” he explains.

Part of the goal was to have what he describes as “secondary housing” where people can have “semi-independent living” with some rental supports.

“I think it was Day 3 on the job when Seneca College put out their report on 2SLGBTQ+ youth saying, ‘We don't feel safe in what's available, so we're staying on the streets.' We wanted to address that, looking at how do we prevent people from going into homelessness? We can't end it if new people are always coming in [so it is a matter of] looking at that preventative piece instead of just the reactive piece, which is emergency housing and reacting to it.”

It is something of a joke among the administration at Blue Door Shelters that the ultimate goal is to work to put themselves out of a job, but there is a grain of truth in there. They would love the need to no longer be there, but without some key supports from all levels of government, the need will always be there – albeit with some shifts.

“I look at countries like Finland that had 600+ emergency beds for people and now have 52 and has been the first country to proclaim they've ended homelessness,” he says. “That took a lot of time looking at all sorts of different options: semi-independent housing, independent housing, shared housing – all these different models and doing that. They did work themselves out of a job in a sense and I would love that, where we would need housing support workers instead of emergency workers and to see that emergency number stay put and see all those other pieces grow so people aren't entering into that. That would be amazing in 10 years if we only needed about 20 emergency beds because we have all these different housing options for people that are affordable and supportive.”

“The answer isn't to have thousands more emergency beds but different, affordable and safe housing options for people,” says Braithwaite. “We're looking forward to social purpose real estate. Blue Door has to be creative and work with all levels of government to retain housing and get housing into the hands of organizations like Blue Door where it will be truly affordable, rent geared to income, and stay affordable for a long period of time because we own that housing without carrying a large amount of debt on it. We see for every new home that's built that is affordable we lose 15 to the private sector so we need to double down and do the real hard work. That is the answer moving forward; to build all sorts of affordable housing.

“One example I will give you is Blue Door worked with Parks Canada and Rouge Valley Park, which has 44 vacant homes. They don't have the capital to fix them. Blue Door was able to secure the capital through different grants, our Construct program, along with our friends' similar program called Building Up did the work and turned that vacant home into a duplex and in return Canada Parks still owns the home but we have 30 years of rent-free housing for Blue Door and we're able to turn that into rent geared to income housing for two families. That is the future. That is what is going to make the biggest difference: units of truly affordable housing in the hands of non-profits like Blue Door.

“One of the misconceptions is that homelessness is a choice. Quite often you hear the best cure to homelessness is a job. There are so many people who due to their physical or mental health situation and life are not able to work right now but everyone deserves a safe and affordable place to call home regardless of the situation. There is some judgement there. The gap between what's affordable and what people have has just grown. It is becoming increasingly tricky.”