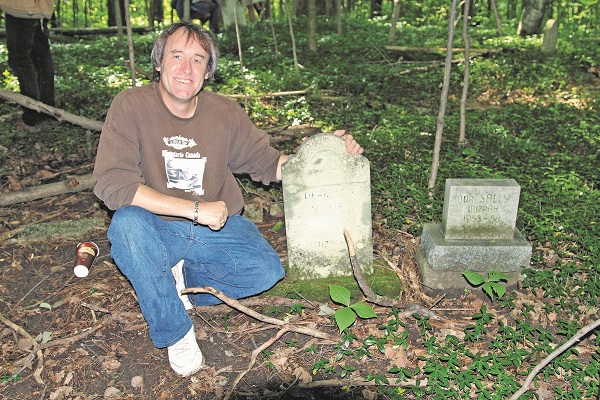 It lies hidden away in forest and brush, a natural oasis in the middle of burgeoning development, but unless you went in for a closer look, you wouldn't even know it was there.

While the site is not yet open to the public, this forgotten piece of Aurora's history will soon give up many of its secrets in Tales from the Aurora Pet Cemetery.

An initiative by local heritage activist David Heard, who has taken the successful protection and eventual public access to the forgotten Aurora Pet Cemetery on as a passion project, the May 4 event will take ticketholders on a virtual tour of the site and share first-hand accounts of both those who were there when history was being made on the site, as well as the stories of those who have lent a hand in its recovery.

“We were there a couple of years ago and we curated almost 400 stones in one afternoon,” says Mr. Heard of the west Aurora site, which is currently inaccessible to the average history buff. “Since that time, there has been quite a buzz within the community and I have gotten context from people within and outside Ontario, people who are now living in the United States, who have pets buried there. First, they are ecstatic it is going to be preserved and open to the public.

“Now, the big chatter is when is it going to be available to the public? There is still a lot more work to be done, and we're a long way for that to come to fruition, so this is an opportunity to get that ready.”

The abandoned Aurora Pet Cemetery – also known as the Happy Woodland Cemetery – was founded in 1933 by Victor Blochin and Anne Wilson.

Over its years of operation, through the 1970s, dozens of families made Happy Woodland their destination to give their beloved pets a proper send-off and a permanent memorial.

Pets buried there did not just belong to families local to Aurora and King; burials include the beloved four-leggers of prominent Toronto families and at least one RCMP horse, who was brought in from western Canada for internment.

Since operations were wound down, the site became derelict, forgotten, until heritage activists took up the cause. Now, despite the development going on around it, the cemetery itself has been secured for preservation and public access will be included in the completed subdivision.

“There is excitement that this site has historic significance, cultural significance and artistic significance,” says Mr. Heard on why the cemetery is important. “The creativity involved in the stones is breathtaking. There is just so much you can take in. It is an emotional journey to go through there and I think that is why people are anticipating it. The cemetery is probably the first of its kind in Canada, probably going back even further than we thought. As we go along, we're going to find out more and more information about it that is going to make people want to go there.”

Indeed, since word has spread once again about the cemetery, more and more information has been trickling in.

Mr. Heard, for instance, has since interviewed a man who spent many years working at the Kennel Inn animal shelter, working alongside Blochin in the process. He recorded his recollections, including Blochin's precise attention to detail, as well as examples of funeral services, including one woman who brought her dog in a Lucite coffin complete with pallbearers and a full-on funeral service.

“This is just the tip of the iceberg,” says Mr. Heard. “At Tales from the Aurora Pet Cemetery, we will be debuting our documentary which shows how the entire day (of inventorying memorial stones) played out, including people uncovering stones firsthand. One of them that blew me away was a couple digging through the soil, seeing something shiny, removing the soil away gingerly with their hands to be as gentle as possible, and there was a brass cat underneath. It was uncovering history right there.

“I think Aurora's history was in a void. It was very low key. I started finding out more of these stories that hadn't been talked about yet, incredible impacts Aurora made on the globe, or unique finds. This is one of those ones where we can say we have a national historic site here in town, but imagine having another? This [pet cemetery] is heading in that direction.

Tickets for Tales from the Aurora Pet Cemetery, which will take place Friday, May 4, at the Aurora Community Centre, are on sale now for $15. They are available for sale in person at Aurora Antiques (15231 Yonge Street), or online at auroraantiques.ca.

Excerpt: It lies hidden away in forest and brush, a natural oasis in the middle of burgeoning development, but unless you went in for a closer look, you wouldn’t even know it was there.