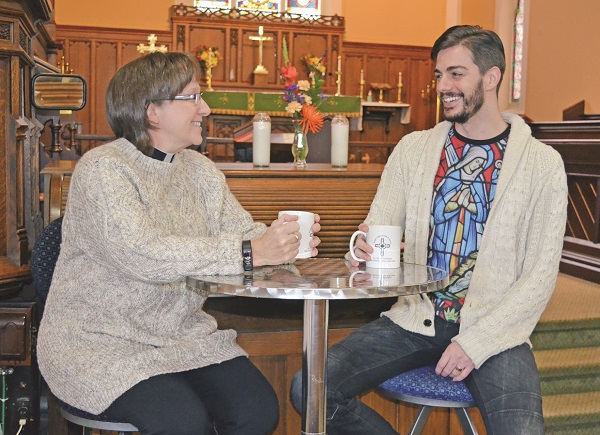 Change, for many, can be a very exciting prospect. For others, however, it can spur a huge degree of anxiety and concern.

No community is immune to this but, in Aurora's case, Trinity Anglican Church is stepping up to foster dialogue on some of the very important changes that are happening both here at home and around the world.

“We have noticed here is a lot of anxiety and concern coming out of some sense of the shifts going on in Aurora, some shifts that were going on in the lives of our congregation, and certainly some of the big geopolitical shifts that are going on in this world,” says Trinity's Rev. Dawn Davis. “One of the things we noticed is there are not a lot of safe places in society for people to process and reflect on what is going on in their own lives, and this is exactly what the church is supposed to be about.”

Enter “Holy Shift” – a new sermon series designed as a dialogue between a Baby Boomer (Davis) and a Millennial. In this case, the millennial is Associate Minister Philip Hamilton, who also pitched the eye-catching title for the series.

It caught the attention of parishioners – and the community at large, who have passed by the banner outside the Victoria Street church – so that mission was very firmly accomplished.

“Part of my hope is we re-frame the conversation about changes, particularly demographics and the culture of Aurora in less of a negative light and see that there are actually some positive changes going on in our community, and also in the world. That isn't the dominant narrative in most media, that there are actually some positive things that are going on and, because we're not hearing it in other places like Facebook and most news sources, I think the church is a great spot to maybe reprogram our brains to think about things from a different perspective on the positive going on in our world, as well as what we can do to be a part of making positive change and resisting negative change, if that needs to be a part of it too.”

Over the course of her 10 years at Trinity, Davis says she has seen firsthand significant shifts in Trinity's parish lists. The congregation is aging. Boomer families, for which church used to be a family affair, are now shrinking in the pews as their kids go off to university or move out on their own. Some of the boomers are looking into downsizing and making the decision to set up shop in another community.

Although the Aurora community is growing and, consequently, bringing new people into Trinity, there are new needs to be addressed by the church. The question, she says, is “How do we embrace the new community that is developing here?”

Brainstorming ideas on how to kickstart the “Holy Shift” conversation, Dawn and Philip began at the most obvious starting point: the “anxiety” they are hearing both from Baby Boomers and Millennials on the “geopolitical” situation, whether it is the Trump presidency in the United States or Brexit in Europe.

“We have adjusted [our topics] as we have gone along,” says Philip, touching upon this past Sunday's topic of communications and seeking the truth, a late entry into the Holy Shift program following the Trump Administration's decision to add the term “alternative facts” into our collective lexicon.”

“When we had our first session, we did more of an overview [of the program],” says Davis. “We're sitting on bar chairs around a cruiser table with coffee mugs and we're engaged in a conversation. At the end of that conversation, we turn and engage in a conversation with the congregation. People have a chance to speak into what they've just heard and get the perspective of a Baby Boomer, so they might hear their own voice, and hear the perspective of a Millennial, which is less well-heard in churches.”

Media, she says, was an issue that quickly cropped up in this dialogue, particularly its role, she says “in forming some of the anxiety we're feeling.”

So much emphasis is placed on what's wrong with the world, she says, that perspective is often lacking, particularly statistics indicating that crime is going down, we're more secure than we have ever been, and we're more affluent than ever before.

“There are a lot of good things happening, but because we get inundated with the negative views, our brains often make that assumption that it is the real thing and then we start living out that illusion and we self-fulfil them and make that illusion a reality,” she says. “We had that conversation and we realised there was a lot of fire in the room.”

Hamilton recalls an instance at an early session when a “Traditionalist” (defined as “older than a Boomer”) responding to the basic question of whether or not the world is getting better or worse. She stood up and said, “I don't know where you were in 1942, but I know where I was and the world has gotten better.'”

“I think it is important for a lot of us to put that into context, especially for Millennials who forget there have been much darker times, specifically when it comes to world peace, than we're in right now,” says Hamilton. “When I took a poll on whether or not the world is getting better or worse, the demographics under the Gen-Xers generally thought the world was getting better whereas the Boomers felt the world was getting worse. An interesting perspective shift.”

“Faith communities, particularly churches, are really unique places in the world that aren't just echo chambers of people who agree with each other, and they aren't [like your Facebook feeds]. Here, we have some diversity politically, culturally and definitely demographically, and it is interesting how we create a safe space for dialogue, even with people with whom we disagree pretty strongly on a lot of points, to be able to talk openly about a lot of this stuff. I think that is really helpful and I don't think there are too many places in the world where you can do that anymore.”

Davis says she agrees, adding: “We have heard from so many of our parishioners that this has seeded conversations they have had. I can't even count how many people who say they go away from this, taken one or two of the parishioners around them and go out for lunch, or meet the next day just to talk about these things. They might have a meal with their family members who weren't here, picking up these themes, and they were talked through. This has contributed to their own ongoing conversation and that is huge.

“It is just waiting to see what is unfolding and to be really sensitive with what the needs are.”

The Holy Shift series continues for the next few Sundays at multiple times and the whole community, regardless of faith, is welcome to be part of the dialogue. For more, visit www.trinityaurora.ca.