Rock of Ages is GTA homecoming for Aurora’s Coll 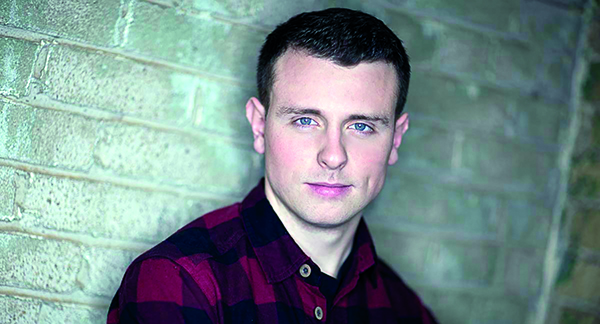 As an aspiring performer, Trevor Coll found some of his first opportunities in his hometown of Aurora.

Now, having toured North America in We Will Rock You, the Broadway musical inspired by the music of Queen, the up-and-coming actor is back on home turf.

Next month, Coll will tread the boards of Toronto's Elgin Theatre, leading a new production of the popular Broadway show, Rock of Ages.

Billed as a "gnarly concoction of power rock and hilarious comedy,” Rock of Ages follows singer Sherrie and bartender Drew (Coll) as they chase their dreams to tunes made famous by Bon Jovi, Def Leppard, Journey and more.

“It's an absolutely fun, powerful love story filled with 80s classic rock songs all connected through this really fun love story – and it's an amazing story about Los Angeles and the Sunset Strip at that time,” Coll explains. “When I saw this (production) was happening, I was trying to manage what my next steps were going to be in my career and if I was even going to stick in musical theatre. Knowing these songs and this role, it felt like something I needed to do.”

Music and musical theatre, however, have always been close to his heart.

Some of his earliest memories involve car trips with his mother and sister where music from the likes of Alanis Morrissette and Amanda Marshall were the order of the day. Watching his sister perform at a local dance school was his first introduction to the connections that can happen between artist and audience, and this is something that he began pursuing locally.

He performed for a hometown crowd as a contestant in the Aurora Teen Idol competition, by taking on roles in some of the non-youth musicals staged by Marquee Theatrical Productions, and pursuing his musical theatre dreams as an arts student at the specialized St. Elizabeth Catholic High School in Thornhill.

“Any opportunity there was to evolve with the arts was something I wanted to do, but my time in Aurora was primarily spent on doing soccer with the Stingers and Hockey with the Tigers, then trying to find these arts opportunities,” he says, adding that he and his sister would have special movie mornings at home on Saturdays with such fare as Mary Poppins, The Sound of Music, Grease, and The Lion King. “Arts school was an incredible way to set a foundation. The people in my class were so gifted. I truly say I was probably the worst vocalist in my class, but I just had the best people listening and engaging. [Later studying media production] I learned what creates a good story and what a good on-screen aesthetic looks like and by the time of my fourth year, I did an internship in Los Angeles and wrote a jukebox musical – a Katy Perry musical – which was more satirical. When I came back to Toronto, we got it put up in a small, fun way and it got me connected with a bunch of people in this industry and I thought, if not now, when? I started auditioning for musical theatre things.”

And the stone-cold successes kept coming, from We Will Rock You and now to Rock of Ages.

“I am grateful at every single moment,” says Coll. “I am very aware that the Canadian musical theatre scene is small and that any opportunity is one that we have to really take with so much gratitude and really live in the moment and enjoy it, learn about ourselves, and where we place ourselves in the industry. We had monumental moments where your life in musical theatre has at least led up to that moment when I was doing that tour and got to perform in Toronto. I think about it and you almost get emotional because all the people who built you…all came out, friends and family, all being able to see the fruits of your labour. There are not a lot of jobs where you have an audience of theatre people that you love come and support you in it. The unique thing in this field is it can happen. I remember walking out on stage, hearing people I loved out in the audience, and feeling like, ‘This one's for them and this one is for my younger self.”

Rock of Ages opens at Toronto's Elgin Theatre from February 23 to May 20, 2023. For further information, including tickets, visit moreentertainmentgroup.com.