Music is centrepiece of Cultural Centre’s “Winter of Content” 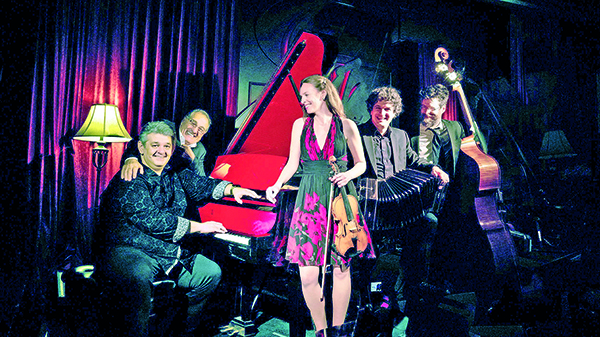 It's a “winter of content” as homegrown Canadian talent shines as part of the Aurora Cultural Centre's winter performing arts season.

A mix of fan favourites and up-and-coming musicians, the winter season offers something for everyone – and with a lot more certainty than in the last few seasons due to COVID-19.

“I call it the ‘winter of content' because we are seeing each other again, which is great, and we're on a more regular schedule,” says Jane Taylor of the Cultural Centre. “We have our sea legs back this year, we're really set knowing where we're going to be and hopefully it rolls out that way!”

This winter's Performing Arts season gets underway on January 21 at St. Andrew's College, with Cultural Centre mainstay John Sheard Presents: A Tribute to the Beatles Pt 2. The first of two shows pianist Sheard is bringing to the Aurora Cultural Centre before the Spring, it's a completely new show featuring Beatles tunes that are yet to be heard at a Cultural Centre performance.

“It's those favourite sounds of the Beatles, but tunes they haven't heard before – not that that ever seems to matter anyway because people are always going to come out to enjoy a Beatles show!” says Taylor with a laugh. “As John always says to the audience, ‘I know you're going to know every word and want to sing along – please don't!' It will be just like old home week bringing everyone together.”

Next up, on Friday, January 27, the Great Artist Music Series will take over Trinity Anglican Church on Victoria Street with the Payadora Tango Ensemble.

Payadora, a contemporary chamber music ensemble performing tango and folk music from Argentina and Uruguay, along with original compositions, was one of the first concerts on the Centre's schedule that had to be cancelled when the pandemic first hit.

Organizers are as excited as ever before to host them.

“They are one of the most versatile groups of musicians I have ever met,” says Taylor. “It's in the Great Artists series, but it really crosses over more into popular music in a way. It's such emotive music. The nice thing about shows in the Great Artist Music Series at Trinity is at 6.30, there's a pre-show artist talk that Rebecca and Drew will be delivering, just included in the ticket. If people want to come and get a little inside information on what they're going to hear that night, it's a great way to kind of whet your whistle on that one. The show itself is 7.30 p.m.”

Live performances will continue on March 4 at 7.30 p.m. when Amanda Rheaume takes over the Aurora Armoury stage at 7.30 p.m.

With music described as “rootsy, guitar-driven ballads” in the genre of heartland rock, Rheaume is a member of the Metis Nation, the 2SLGBTQ+ community, and is devoted to being a “builder of Indigenous music infrastructure and community.”

“Her genre is sort of roots, folk, indigenous music, and she's highly creative and she's an incredible storyteller on top of it all,” says Taylor.

As the Cultural Centre continues its RBC The NEXT stage series, Dominique Fils-Aime: Three Little Words is the next show in the program. Scheduled for March 24 at SAC, Fils-Aime brings to the stage a combo of blues and soul, celebrating the rich legacy of African-American music.

“Dominique is a Montreal-based artist whose star is just on the ascendency – she's already won a Juno award for Jazz – and she's got a genre that kind of transcends soul and jazz, and blues and she is mesmerizing in a performance,” says Taylor. “She is someone we're keeping our eye on and we're very thrilled we were able to, after she needed to postpone in the fall, we were able to rebook her in this really lovely space we have at the Wurth Theatre at St. Andrew's College.”

The Winter concert lineup is rounded out on Saturday, March 25, at 7.30 p.m. when John Sheard returns with his Legends of Motown show.

“These are all musicians and performers who can entertain. They're working at such a high level and they also bring you into their circle. Every act we bring in, we want our audience to come out being wowed by what they just saw. Whether it is discovery, because they don't know who this person is, or they do know, we want them to have that sense of awe and wonder,” says Ms. Taylor.

“Quite honestly, every artist we've worked with as we have been emerging from the pandemic has expressed that incredible gratitude to seeing and hearing their audience again in this way. It's visceral and everyone comes out and sees it. That hasn't stopped yet and we're all getting that feeling. There is that sense of awe and wonder and that sense of, ‘I really feel I was entertained and had some sense of discovery here.'”

For more on this season's lineup, and to purchase tickets on sale now, visit auroraculturalcentre.ca.