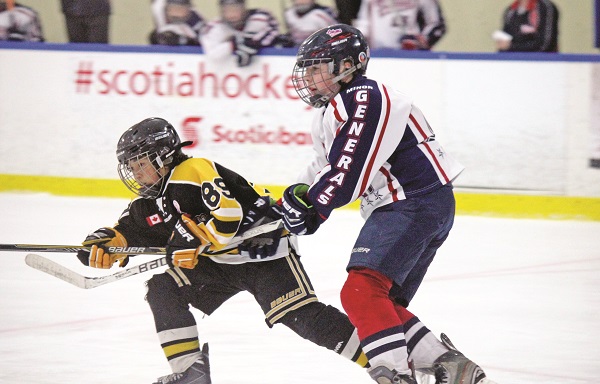 Three of Aurora's regional champion teams can add one more piece of hardware to their successful minor hockey seasons.

The PeeWee A Tigers squeaked in a game on home ice in their three-game series with the Cobourg Cougars, the only game in the tournament played at the Aurora Community Centre. The home team took it by a score of 2 – 0, splitting the other two games for a 2 – 1 series win.

Their AE counterparts, winners of the York-Simcoe league after a sweep of the Newmarket Redmen, swept the Oshawa Generals of Lakeshore two games to none in Whitby.

Lastly, the Minor Midget AA's took to the ice at the Magna Centre to defeat the Whitby Wildcats 5–3 and 2–1.

In the overall points standings, the YSMHL dominated their eastern rivals, ending the tournament with a record of 32-17-3 to close out the 2014-15 hockey season.

Online registration for the 2015-16 season has already begun. For a schedule of in-office registration dates, visit www.auroraminorhockey.ca.