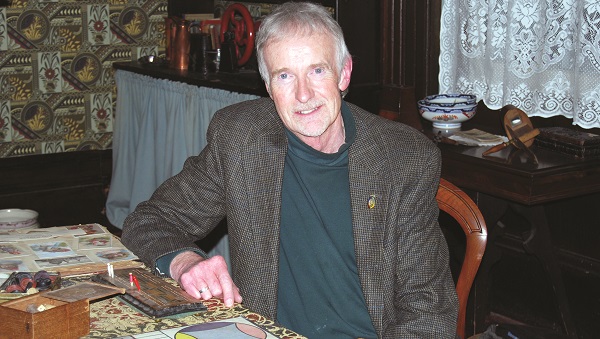 Aurora's John McIntyre is no stranger to local history.

During his tenure, the Church Street landmark received a reversal of fortune and was soon home to a brand new Aurora museum.

Dr. McIntyre is once again assuming the presidential reins of the AHS following Suzanne Reiner. The Church Street School is secured, the Aurora Collection is now in the hands of the Town, but the same worries about establishing a museum and the future of Hillary House remain.

Although on the surface one might not think much has changed, that is far from the case.

With a permanent space now allocated for a museum at the Aurora Cultural Centre, and the collection now in the hands of the Town, they are now at a crossroads and Dr. McIntyre is back to help steer the ship.

At the end of the day, Dr. McIntyre says he's back at the helm quite simply because no one else at this point was willing to come forward, he rejects any notion he is in a caretaker or custodial role.

“That term sounds as if I am just going to stand back and let the chips fall where they may, but I am very committed to the organization and seeing it thrive,” he says. “One thing that has been on my mind is this organization has gone through at least equally difficult times in the past and I have been around long enough to see them.”

From his early days as president, he has watched a museum come and go at the school, he has seen the AHS purchase Hillary House from the family which bears its name, and fund a further $200,000 in restoration work. At that beginning, they were almost inconceivable dreams, but they came true.

“That is what is in my mind right now – it is a difficult time, a crossroads, but there might well be a future out there that we can't even envision right now.”

Over his new term as president, “organizational renewal” tops his list of objectives. That renewal, he said, began February 13 with the election of new faces on the AHS board each with a vision of how they can fit into and benefit the organization. It is also important to have a balanced budget and stabilize their finances after years of having to dip into their reserves, he says.

A further element of renewal, however is the Hillary-McIntyre Park proposal to turn Hillary House and the two properties immediately to the south of it into a public-private heritage complex. As the name suggests, Dr. McIntyre does have a stake in this, as the owner of the southernmost property at Irwin Avenue

“As I look ahead, over the year, I think something will happen. Either the project will be shelved, or it will be going forward in some form. I would hope there would be other leadership on the board who would want to take the initiative to lead it in negotiations representing the Historical Society in that project.”

To this end, Dr. McIntyre says looking at similarly structured Historical Societies around Ontario, Aurora's is unique in still owning a heritage asset such as Hillary House. Places like Markham, Richmond Hill, King, and Georgina all grew to a point where they became too big for just a volunteer organization to manage and were ultimately taken over by the municipality.

It is a “natural evolution”, he says, that has happened slower in Aurora than elsewhere.

“A year from now at the AGM in 2015, I hope we can report we have had a financially successful year so we are not running on a deficit anymore, and yet we have still had some good programming at Hillary House and that we have made some progress, whatever that might be, on the Hillary-McIntyre concept or possibly other models if that turns out not to be the best model.”

Excerpt: Aurora’s John McIntyre is no stranger to local history. When he first became President of the Aurora Historical Society (AHS) in the late 1970s, Aurora was considering...