Humfryes thanks residents, colleagues as term comes to a close 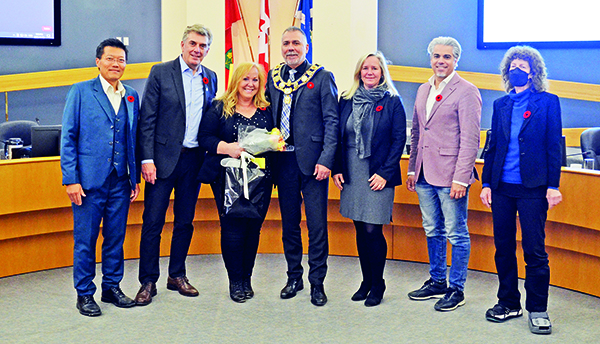 Four-term councillor Sandra Humfryes might be “cheering on from the sidelines” as the 2022-2026 Council gets underway, but her commitment to the community will remain as strong as ever.

That was the message she delivered last Tuesday as her time at the Council table came to a close.

Humfryes, who was first elected to Aurora Council in 2010, was unsuccessful in her bid to represent Ward 1 in last month's municipal election, but regardless of the outcome on election night, she says it will be a “great four years” for Aurora.

“It has been an incredible 12 years; it has been so amazing and I am so privileged to be able to serve the Town for 12 years and get so much out of it,” she told her colleagues. “To give back is one thing, but [it's] the opportunity and honour that we get sitting here to help our residents [and] help the Town move forward.”

Humfryes first became involved in her community when she joined the Town's Special Events Committee shortly after moving to Aurora in 1999. She was looking for an opportunity to make a difference and the more she became involved deeper she fell in love with the Town.

“The Town is its people,” she said, singling out one individual in particular who first spurred her to enter the political arena: the late Councillor and founder of The Auroran Newspaper, Ron Wallace.

“The summer of 2010 was a tough one,” Humfryes recalled. “I had just lost my mom who was a true volunteer, and she had said, ‘Since you moved to Aurora you love that Town, why don't you run for Council?' I said I wasn't a politician but a volunteer.… I went to Ron and said, ‘What do you think?' He said, ‘Kid, just put your hat in the ring. Do it.' I didn't expect to hear that. I thank Ron for doing that because he helped me see a part of the world I never would have known existed.

“When you can help residents there's nothing better than that.”

There have been many accomplishments over the last 12 years, and among those underscored by Humfryes were the work thus far on the Town Square redevelopment project and rising to the challenges of COVID-19.

“What's really exciting for me is being a part of Town Square; It's an old idea from 25 years ago…and that little piazza was a little idea that we all started chatting about and then, the next thing you know, you have this beautiful Town Square, which is a destination. I can't be prouder.”

“All the great work done during the pandemic this last term was so significant and somehow this Council was able to plow through with incredible staff and the leadership here that helps us look really good,” she added with a chuckle.

Closing out her final speech after twelve years at the microphone, Humfryes paid tribute to the Councillors past and president with whom she served, and shone a special light on late mayor Evelyn Buck, the late deputy mayor John Abel, and incumbent Mayor Tom Mrakas, who begins his second term this week.

“When I had a tough night, some pretty passionate issues at the beginning of the (2010) term, I wasn't used to having [a full crowd] in the chamber all not happy. I remember Evelyn said, ‘Get over here. Sandra, please remember what happens at the Council table sometimes is a stage. The words are honest, but it's a stage – stop taking it to heart and move on'. Gosh, she was so right. I should have used that these eleven-and-a-half-years: don't take it to heart, continue and just move on. We're all doing this for the right reasons.

“We miss (John Abel) at the Council table. We had some heated discussions and, again, we didn't all agree at the time, but in a previous campaign he would call me and leave messages like, ‘How can I go by that sign that fell over with a heart on it? I had to go and put it in its place. Hope you're doing well.' It just goes to show that it doesn't matter where we think we are in our perspectives, we all have a camaraderie with each other and I know that we're there for each other no matter what.

“Mayor (Mrakas), you arrived in 2014 [and], getting things done, proved how much you love this Town. You move mountains with your tireless efforts to stop the OMB (Ontario Municipal Board) from what they were doing. Maybe it will come back in a different format, but you're not going to quit. There are lots of challenges ahead and I know this beautiful Town needs to be protected. And with you and the leadership around this table, we have nothing to worry about.”