Healing defined in many ways through new art exhibition 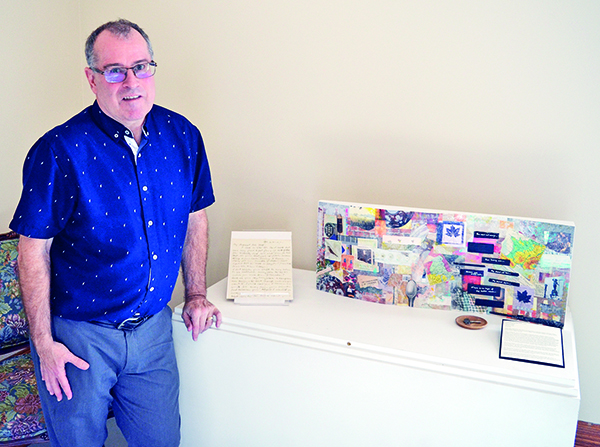 From a doctor listening intently with a stethoscope to a parent putting a cold compress onto the forehead of a feverish child, healing can take many forms and be defined in different ways.

To help zero in on his own definition of healing, however, Aurora artist Kevin McBean looked back in order to go forward.

One of nearly two dozen artists to find artistic inspiration inside and in the grounds of Hillary House National Historic Site, home to generations of local doctors and now home to the Koffler Museum of Medicine, McBean delved deep into the archives of the Aurora Historical Society to see how the space had been used for just that: to heal.

Inspired by correspondence from the First World War, McBean's “These Are Healing Times”, which is part of an exhibition “Inspirations from a Place of Healing,” now on at Hillary House and in Town Hall, has its foundations in the experiences of the Hillary Family at home and from the fields in France.

While Dr. Robert Michael Hillary was in the theatre of war tending to the wounded, his wife, Edith, was left to keep the home fires burning, including tending to all the little colds and illnesses in the household.

“Because there is so much history in the house, I wanted to do something that covered the course of its history,” says McBean, of the mixed-media piece that covers the building's history from the 1860s through to 1919. “The family was struck by tragedy [when] Dr. Hillary was killed in France. This was their family life before, during and after those incidents happened in France.

“There's everything [incorporated] into the piece from letters, postcards, stamps, pieces of medical journals, it's a combination of the things that would have been in the house. When you're feeding a family of eight or nine kids, travelling, and still having a doctor's office, I couldn't settle on one photograph, so I really wanted to do something across time and medium.”

Participating artists in the exhibition found their inspiration in just about every nook and cranny of Hillary House, including objects in the collection, ranging from examples of medical equipment to a Victorian dress form.

For Kathleen Vahey of the Aurora Historical Society, who curated the show in partnership with Samantha Jones, Gallery Manager for the Aurora Cultural Centre, Inspirations from a Space of Healing was intended to be a chance for artists to make their own connections to the spaces and artefacts on site.

“I am very excited that we're finally here today celebrating the opening of this exhibition as it has been two years in the making,” said Vahey at the exhibition's launch on December 10. “It has been such a great experience to work with the Cultural Centre and then later with SOYRA (Society of York Region Artists) bringing this idea to life. One of my goals as a museum curator is to really break down the idea that museums are dull, kind of static spaces. By having artists tour through the house and allowing them to make their own connections to the spaces and artefacts, which then spur the creation of art, really demonstrates that museums are vibrant and living spaces full of opportunity.

“During the COVID-19 pandemic, this idea of health and healing has really been at the top of everyone's mind and the connections at Hillary House being historically a space for that with the doctor's office and even the home rooms, too, it seemed to me like such a great space for reflection and a source of inspiration for the creation of art. I sincerely thank all of the featured artists in this show for participating in the project and engaging so meaningfully with the space. It's incredible to see the finished art and read all the artist statements that so articulately explain the connections and stories that came from this project.”

Added Jones: “One thing I have learned through my curatorial work is to always expect the unexpected. One thing I did not expect was the overwhelming power of objects and their ability to trigger the artist's memory: a little pink dress sparking the memory of a caring grandmother, crutches in the front room recalling a period of illness, but also a very strong recovery, and the house as a whole, triggering a place one may have grown up in as a child.

“What we see in this gallery today is a collage of memories, adding to the archive of stories already existing in this place from its past inhabitants. Healing is a never-ending presence that ebbs and flows throughout our lives. Today it is ever-more prevalent to the people of our community in a variety of ways. Thank you to a group of individuals not obviously seen in this exhibition but they are so integral to the actual conception of this show. In the past, present and future, I want to thank our healthcare workers.”