Handful of rugby Saints named to Ontario Under-18 squad 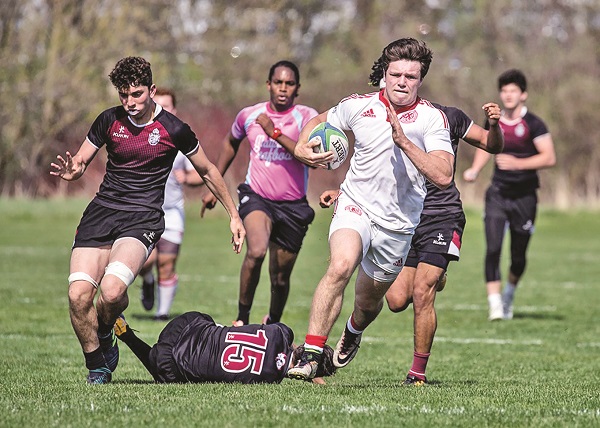 Not content with perhaps the most successful season in CISAA boys rugby history, a handful of Saint Andrew's Saints are looking to prove their worth at the provincial level.

Ian McLean, Matt Hollett, Lachlan MacLean, Angus Austgarden, and Will Abbott will all represent Ontario this summer at the Under-18 level, chosen just over one month after helping the varsity Saints to a perfect regular season record and a league championship.

Though a program with a long and storied history, varsity Saints head coach Jon Butcher believes it may be the highest number ever selected.

“I don't think we've ever had more than two provincial players in a given year,” said Butcher, who has coached with the program for twenty years. “And even that is rare.”

Key members of what Butcher called a “perfect storm” of top varsity athletes, the Saints undefeated season was their first in 25 years.

All veterans on the squad, Abbott will be the only one of the five to return to St. Andrew's next year, a key cog at the fly-half and inside-centre positions.

A Toronto native playing with the Balmy Beach Rugby Club, Butcher praised Abbott's physical abilities on the field, including his “near-flawless tackling” and “superb poaching skills.”

McLean, who is heading Down Under in the fall for university and Australia's Rugby League, was lauded as SAC's Athlete of the Year this semester for his work on both the rugby squad and the first hockey team.

Both Hollett and MacLean are homegrown talents from Aurora, both also suiting up for the Aurora Barbarians. Hollett, the team captain, already has a Team Ontario trophy in his case from the National 7s Championship in Vancouver this past March.

MacLean was honoured as the most improved player on the Saints squad last season as a rookie, with Butcher adding that his rugby skills have developed “at a phenomenal rate.”

“He's a loose forward with excellent mobility and a high work-rate,” said Butcher.

Austgarden, a native of Barrie, rounds out the Saints crop as a “versatile and very mobile front row player.”

This year's crop of Ontario's best have a busy schedule ahead, kicking off their tour with a cross-border series at the University of Guelph in late July, followed by a ten-day tour of Ireland in August.

McLean, at least, is no stranger to the Irish game: he travelled with the Canadian Under-18 national team for a tour to the country in the spring, as did teammate Campbell Clarke, who represented on the Under-19 stage though only seventeen years of age.

A native of St. John's, Newfoundland, Clarke led the Saints in scoring this season with 88 points.

Once the Team Ontario summer season ends, the game on the field continues, with Hollett, MacLean, and Austgarden carrying on the Saints legacy as member of the McMaster University Marauders in the fall.

Excerpt: Not content with perhaps the most successful season in CISAA boys rugby history, a handful of Saint Andrew’s Saints are looking to prove their worth at the provincial level.