Hall of Fame’s Honoured Members: A golf genius and a force on the pitch 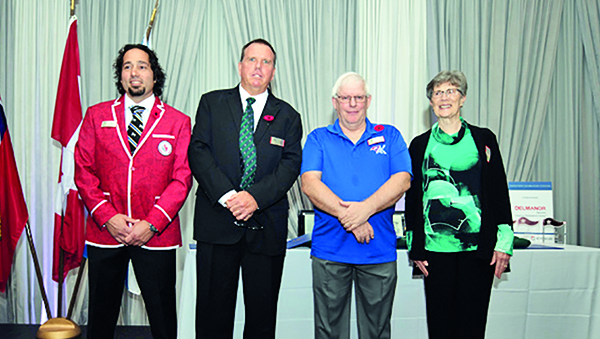 Last week, you might have had the pleasure to read about two remarkable stories from the Aurora Sports Hall of Fame Induction Celebration Dinner on November 10.

Janice Jones and Dave Giroux made their marks on the Town of Aurora through their commitment to their respective sports and their efforts to make services in the Town that much better.

The Aurora Sports Hall of Fame inducts four individuals annually into the Hall, and this week we conclude our coverage with Colin S. “Pop” Nisbet and Marco Di Girolamo.

Nisbet moved to Aurora in 1919 and ran his family greenhouse business for many years. But, when he noticed the Aurora Golf Course wasn't taking care of their grounds, he purchased it and renamed it the Aurora Highlands.

The local newspaper even named it as “Aurora's First Place of Beauty and Pleasure.”

At the age of 74, he sold the course and purchased a farm at Vandorf Sideroad and Leslie Street. He purchased additional land nearby and grew it into Westview Golf Course that it is today.

Remembered as a hard-working individual, Nisbet passed away in December of 1973 at the age of 92.

“Pop loved people and he would have really enjoyed an evening like this,” said Nisbet's grandson Mike, in his speech, following a video recollecting Pop's life.

“The Hall of Fame induction is a great opportunity for the family to reflect on what Pop started. He would be thrilled with all of the people who called Westview and before that, the Aurora Highlands home, the generations of family have played both for the past 75 years. At Westview you still hear stories of golfers that they spent their youth there…The parents would return later so it really was the perfect day care. For many it was their first job as well and for others it was their last…Both properties are special for many people. Pop would have loved that and would have loved this. Thank you very much.”

Once Nisbet's story was complete, the final inductee of the evening was Marco Di Girolamo; and he had quite the supporting cast with him in the crowd for this one.

Di Girolamo grew up playing rugby when he moved to Maple, ON, when he was 11. He went on to represent Canada in 7's and in 15's, including appearances in the 2003 Rugby World Cup, the Commonwealth Games in Manchester, U.K., and World Games in Japan.

Rugby brought him all over the world, but what he always carried with him everywhere he went was the Town of Aurora.

Since 1993, Di Girolamo has been a member of the Barbarians Rugby Club and led them to five-straight championship titles as well as three provincial cups.

His wife, Pam, also played rugby and was inducted into the University of Western Hall of Fame, in 2021.

In a hilarious 24-minute speech to the crowd, “Deeeg” took the stand humbled by the experience and also lit everyone up.

“Thank you from the bottom of my heart. I am truly honoured and humbled by this experience. Believe, that's what I tell my kids all the time. Seven little letters that mean so much. The word from all the family, teammates and friends, who believed in this kid. There are two famous things about rugby players. You may have heard some of them. First one is God created beer, to stop rugby players from taking over the world. [Having] seen some of my teammates in action, there's a bit of truth to that. The second saying, and it's not an exaggeration, is rugby is a hooligan's game played by gentleman,” Di Girolamo said.

“I played my first men's game when I was 16. I was probably a buck-50, soaking wet. I remember I was scared. I bet my parents were scared for me, too. They must have been wondering what the hell I got myself into. Also, probably not the first time they thought that. We were rolling up on this rugby pitch, and it looked like the local prison let their inmates out for some exercise. In my 16-year-old eyes, there's these giant, scary looking men, wearing these tiny little shorts. Size didn't matter to me, neither did my age. I didn't allow the fear get the best of me. I held my own with those guys. As the year went on I got better. So, they gave me this name ‘Super Kid.' Some in this room still here, still call me that name today even though I'm 45.”

Di Girolamo had a poem prepared later in his speech and in the end, shared a traditional rugby chant with the crowd in attendance.

In a remarkable evening, filled with food, laughs and the sharing of memorable experiences, it left everyone in awe of what the Sport Hall of Fame offers here in Town. And what it means to the people inducted into it.