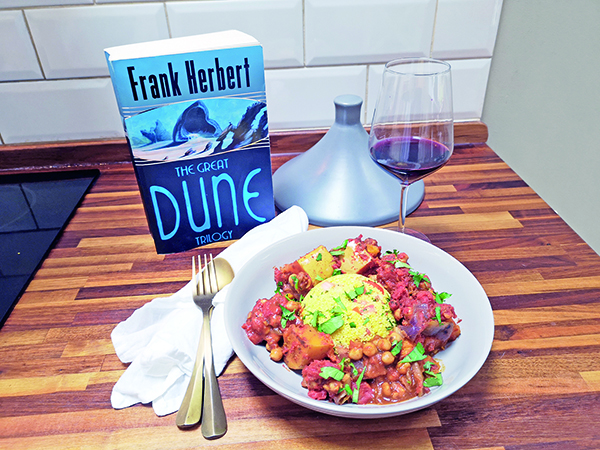 “If you could invite three people to dinner, living and dead, who would it be?”

We've often been asked this philosophical question, with the answers being as unique and illuminating as the individual.

But, the Aurora Public Library (APL) is now going one step further: What would you serve?

That's the question APL is asking local booklovers as they create The Great APL Cookbook.

“Readers and foodies often share a strong bond,” says the APL. “There are many cookbooks based on the foods literary characters savoured in the novels they appeared in, but what would you cook for your favourite literary character if you could invite them to dinner at your house or restaurant?”

Answers to these questions from across the community will form the basis of The Great APL Literary Cookbook, an initiative inspired by Irish sci-fi writer Rohan O'Duill, a professional head chef, whose “Fiction to Sink Your Teeth Into” column caught the eye of Reccia Mandelcorn, APL's Manager of Community Collaboration.

“I thought it could be very creative,” she says of this Aurora-wide endeavour. “I also thought it would allow people to share recipes from different cultures and family favourites that were handed down. One of the recipes Rohan featured in the newsletter is the novel Cascade by Rachel Rosen. Rachel is a member of the APL writer's group and one of her characters happens to be Tamil. What he did is posted a recipe for ‘Medu Vada' which are actually Tamil donuts. They were inspired by his favourite character in her novel, Sujay, and she is a young political intern who is also a magic-affected individual. Our community would be participating but it could be any novel. It could be Dostoyevsky or something a local author has written.

“We did a really interesting collaboration with the York Region Food Network where we produced three small cookbooks as part of the Culinary Traveller program. The community loved them and we had to put that project on hold because of COVID. So I thought something like the Great APL Literary Cookbook would fill the void of missing the Culinary Traveller.”

The Library has put out the call to everyone in the community, including restaurants, the York Region Food Network, and even local seniors' groups who might have a bevy of recipes to share with the community.

It can be a recipe inspired by a character in a book, by a character's taste, something they are described as eating within the book's pages – and you can even take a reverse approach to the project by identifying one of your favourite recipes and finding a book or character to fit the bill of fare.

“I would cook a stir fry for Linda Rui Feng, author of Swimming back to Trout River, which is our One Book One Aurora featured book this year,” says Ms. Mandelcorn of her personal approach to the assignment. “I would hope that because she herself is knowledgeable about that kind of cooking that she would appreciate my very humble attempt to create a recipe based on cooking that she might have grown up with.

“We invite people to peruse our cookbook collection and we have a wonderful online resource called A-Z World Food. It has foods from all over the world and it is a great opportunity to try out some recipes. When you come up with one you enjoy, think about whether that would be something you would like to cook for your favourite character in a book.”

If you're interested in making a contribution to The Great APL Cookbook, you can send your submissions, along with the cover of the book and a mouth-watering picture of the finished dish, to Lucy Frechette at lfrechette@aurorapl.ca.

The submission deadline is Friday, October 21.

Selected recipes will be feature in the book – in print and online – and those whose recipes have been picked will also receive a gift certificate to a local business.