Golden Eagles fall to Cougars 4-2 on the road 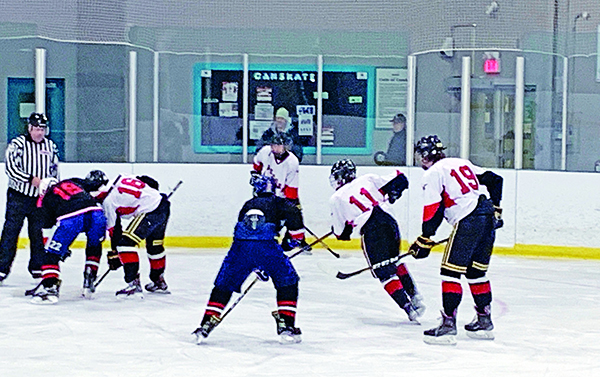 The Aurora High School Golden Eagles fell to the Keswick High School Cougars 4-2 this past Monday.

In a tough outing in Keswick, the Golden Eagles came into this game with a perfect 5-0 record on the year in North-Central division.

After being all tied up thanks to Golden Eagles player Will Dodd's goal, assisted by Cristian Pisapia, the Cougars took the lead in the second period and never gave it up.

The Cougars scored a goal in the second period and another two in the third period, eventually taking a 4-1 lead.

With 1.13 left to go in the game, Owen Pinder assisted by Griffin Carriere and Julian Fryer, made it 4-2.

It may have been a tough outing for the Golden Eagles today but, a result, that is not indicative of how their season has been going.

The Golden Eagles have one of the best offences in tier two this season, with 28 goals forward and only seven against prior to this game. Their 21+ goal differential is the best in all of the league.

The Golden Eagles surely were looking to get back to their winning ways today as the boys went back out on the road Thursday to take on the Sutton District High School Sabres.

Following that game, the boys will come back home to play their last game before Christmas on December 20. That game will be against the Dr. G.W. Williams Secondary School Wildcats.

Puck drop for that one is at 2.30 p.m. at Stronach Aurora Recreation Complex.