Couple’s trek from Lake Ontario to Barrie raises more than $12,000 for Food Pantry 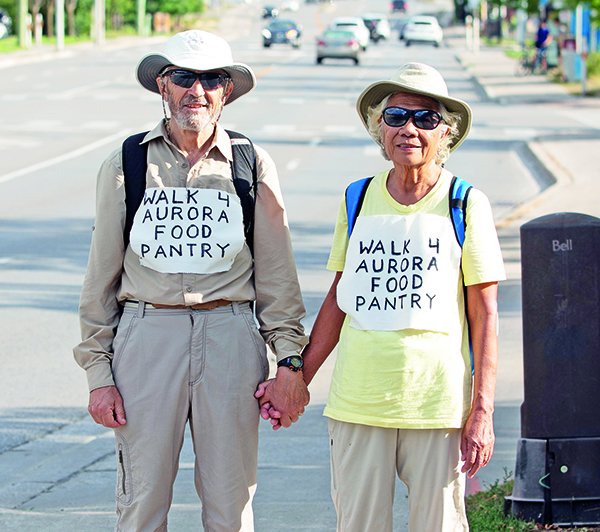 When Aurora couple George and Erlinda Biondic set out on foot from Lake Ontario to Barrie this past Saturday, they hoped to raise awareness and funds for the Aurora Food Pantry – but the success of their mission took even them by surprise.

Following the completion of their trek on Sunday afternoon, George, 70, and Erlinda, 82, had raised a whopping $12,000 for the local food bank – and the money is still rolling in.

The couple started their journey from the waterfront on August 13, proceeding up Yonge Street to Aurora to spend the night at home before setting out the next morning, again on Yonge Street, with the final destination set for Barrie City Hall.

For the couple, each of whom hold several national and international running records in their age brackets, it was a special way to celebrate George's 70th birthday and help give back to the community they call home.

The results, however, were beyond their wildest expectations.

“We're absolutely thrilled we were able to raise quite a bit of money for the Food Pantry,” George told The Auroran on Monday afternoon after a good night's sleep knowing the mission had been completed. “By today we had raised about $11,000 which is really way more than we anticipated.”

This figure had swelled by press time this week.

As they set out, Erlinda helped propel them forward as George, by his own admission, was feeling a bit out of shape and trying to “get back to the swing of things.”

“Erlinda was really a tower of strength and got us through to the end of Aurora,” said George. “Yesterday, the roles were reversed. I guess I got my second wind and Erlinda was struggling. Going from Bradford to Barrie as a pedestrian is not exactly pedestrian-friendly in the sense that it's a lot of shoulder, almost no asphalt to walk on, so on gravel shoulders and going uphill, it was really tough.”

Adds Erlinda: “Even the stones were getting into my shoes. Had I known, I would have worn gaiters – and the traffic? My gosh, the cars were just whipping by.”

“We didn't know these hills when we drove up and scoped it out, but on foot it's a totally disparate terrain," George interjects.

By the time they reached Barrie's city limits after traversing all the hills along the way, the couple briefly considered a short cut to City Hall but keeping in mind their promise to travel Yonge Street the entire route, they stuck to their guns and completed the mission.

“Anything worthwhile in life you have to struggle for and, by the end of it, we really felt alive and felt that we had added value to Aurora,” said George.

Adds Erlinda, recalling some of the well-wishes they received along the way, “We had signs on our backpacks supporting the Food Pantry and some people we met on the street gave us money. They didn't know us, these were strangers and they're not even from Aurora.”

For George, it gave him “faith in humanity that there are kind people everywhere.”

“It certainly made us feel good and we think others should feel the same way.”

Now that their mission is accomplished, the Biondics could be forgiven for resting on their laurels, but this is certainly not the case.

For Erlinda, this past weekend's walk was something of a warm-up for another running competition at the end of this month in Manchester, Tennessee.

As she gets into the zone for that, she encourages other people in their respective communities to get up on their feet and make a difference for their local food banks or the causes close to their hearts.

“People can do the same things in their community,” she said. “You can walk, bike, climb the CN Tower – whatever. You can even swim 100 laps.”

Added George: “We're contributing to Aurora, but everyone has their own town or their own city [to support]. We encourage others across Ontario and Canada to do the same thing, to be of value beyond the age of 65 – a great value to their communities.

“We hope this will continue in the sense that we have raised awareness for this need the Food Pantry is providing. It really is an important service for those less fortunate. At the same time, people were getting all kinds of emails saying how they are inspired and hopefully people of all ages are inspired to be more active in not necessarily walking but active in whatever is their passion. They should find something they feel really strong and just pursue that. Those are two things that we're pleased to have an influence.”

To continue to pledge funds towards the Biondics' efforts, visit aurorafoodpantry.ca, click DONATE, and select George Biondic's 70th Birthday Walk from the dropdown menu under “FUND.”