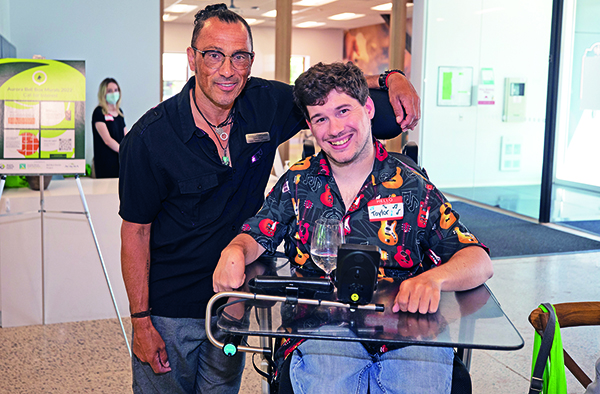 Facilitators for the Aurora Cultural Centre are aiming to make sure the entire community feels like it has a place at the table following a symposium this summer on inclusivity, diversity, equity and accessibility – or, I.D.E.A.

Held at the Aurora Armoury in May, the I.D.E.A. Symposium was an interactive event for cultural providers and those with an interest in the field to share ideas and start a conversation.

The concept, according to Cultural Outreach Coordinator Glenn Marais is to build a model where people feel “included in the experience so you can grow and learn.”

Reviewing the success of the symposium, Mr. Marais says conversation is the best path forward.

“A lot of the issues we're seeing in the world right now are presumptive, in that ‘I see this person and I think they are this and I will react this way' and what this really pointed out to us is there are a lot of things we just don't know because we haven't lived those lived experiences and it is a matter of coming to these spaces, being open, asking good questions and engaging with an open heart,” says Marais. “You learn and grow from that – and that capacity is there for everyone.

“Some are afraid to ask Indigenous people, ‘What happened to you? What was your experience? How can I help you?' You have to start somewhere and a good starting point is to ask those questions and learn. If we don't, we're never going to learn and we're going to be stuck in this cycle of perception and ideas about people and never really learn. It's a shame because the potential in Canada is enormous for us to be an example to the rest of the world.

“People need to speak out and get involved, learn and share a better message.”

This was exemplified at the first I.D.E.A. event when he says three musicians formed a triangle at the Aurora Armoury, put a variety of international musical instruments in the middle, and each musician took turns leading and facilitating a song.

People were encouraged to pick up an instrument and try them out and, as the session went on, people became more comfortable jumping in, singing, and participating in a very valuable exchange.

At the end of the day, that's what the symposium was all about.

Marais was not interested in a conference of talking heads. Rather, the aim was for participants to be involved and engaged as much as possible on ways to increase accessibility in all facets of programs and demographics.

“The goal was to allow people's voices to be heard so they could strengthen and embolden our community,” says Marais. “By giving people a platform to speak uninhibitedly and to share their life experiences with you to grow as a person and learn from [others]. Many people were unabashed in what they were saying, just forthright and clear in sharing their experiences. We had someone from the Indigenous community, the Black community, someone with accessibility issues and someone from the 2SLGBTQIA+ who were speaking as keynotes.

“We also had a professor from Laurier with a project where he is able to amplify the bio-vibrational energy of plants. It synthesizes the sounds so that you can actually hear music coming from plants. The overarching message of this is everything has an energy, a spirit and connection on this planet. In our history we haven't approached it that way. It's here's this planet with a harvest for us to pick from as the dominant spirit, but it ties into this concept of inclusivity and equity that it extends not just to human beings. It's a novel concept but one that is actually starting to grow.”

Other key takeaways came through a workshop led by Indigenous knowledge keeper and former educator Jan Beaver who facilitated a talking circle that invited attendees in to participate in Indigenous culture.

“Her message is to not be afraid of Indigenous culture and don't look [at] it like it's always Reconciliation; look at it as an invitation to come in and learn and grow from it,” says Marais. “It was an amazing experience to have a talking circle and it brought out things that really blew people away. She said when you get the feather in your hand, what you planned on saying will change and you will be amazed at what you do say.”

What the community has to say to build on the findings of the Cultural Centre's first I.D.E.A. symposium could offer Aurora a few more surprises in the months ahead.