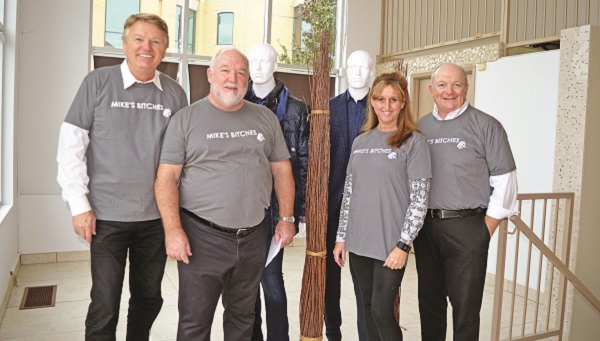 Marilyn Rathke could barely find the words to express the gratitude she felt Thursday as people filed through the doors of MR Menswear.

The Alliston woman, along with her husband Hans, was there to lend a hand as people opened their hearts – and their wallet – in support of their son, business owner Mike Rathke, who has been waging a second courageous battle against cancer.

The holiday season is a make or break time of year for any business owner, especially so for a sole proprietor like Mr. Rathke and this year was looking pretty bleak. His treatments over the course of the last year has kept him largely away from the store, a trend that will continue for the next little while as he recovers, but the future is looking brighter thanks to “Mike's Bitches.”

Tina Fey once said “bitches get stuff done,” and Mike's lived up to their name.

The “Bitches” – a group of friends who banded together to help Rathke get to and from his treatment – organized the event to support the store and, through a silent auction, support Southlake Regional health Centre in the process.

“We all know Mike in different ways and we got together wondering what we could do to help,” said Steve Hinder, one of the “Bitches” on hand as the morning drew to a close. “Us bitches were the drivers for his treatments, and the five of us each picked a day and that was our day with Mike. We watched him go through the whole process. As we chatted, we realised we had to help somehow, so what does he need help with? It's his business.

“We knew he couldn't be at his business, and he was so fortunate to have stayed in touch with a number of his high school buddies. The girl behind the counter of his store, Debbie, went to high school with him. She was working in retail, happened to not be working right now, found out about Mike and said she would come back – maybe shorter hours, but they would keep the doors open. She drives down every day from Alliston to help him manage the store.

“Mike would never take charity, that was never in the works, but we felt that if we could open the store today people would come because he has such a loyal client base. People love Mike, but they just didn't know what was going on.”

Mr. Rathke could only stop by the store early on in the day and what he saw moved him greatly. Over 100 people RSVP'd to the event with more still coming through the doors.

His mother was similarly moved.

“We're just really overwhelmed,” said Marilyn. “People have just come together and supported our son. It's unbelievable. They love him, just love him, and that just means everything to me. He really wishes he could be here but it is really not something that is possible right now. It would just be too much for him, but we really want the community to know how much we appreciate it all. We're just so thankful.”

Added Mr. Hinder: “The message is you live in a pretty special place when people rally because there is someone in need. Think of others at Christmastime. There are a lot of folks out there who could use a leg up from time to time and Mike just sets a high example for everybody.”

Excerpt: Marilyn Rathke could barely find the words to express the gratitude she felt Thursday as people filed through the doors of MR Menswear. The Alliston woman, along with her husband Hans, was there to lend a hand as people opened their hearts – and their wallet – in support of their son, business owner Mike Rathke, who has been waging a second courageous battle against cancer.