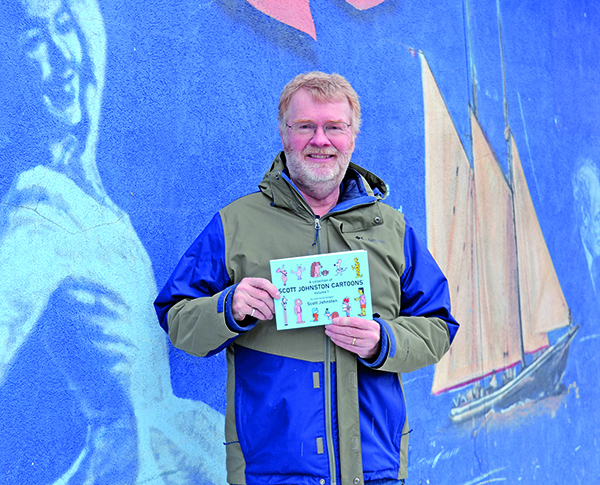 Scott Johnston has been “scribbling” ever since he was a kid.

Influenced by the funnies in any number of newspapers, he spent many hours poring over comic strips like Peanuts developing his own characters, voice, and style.

For more than 20 years, he has used his pen to take a light-hearted look at the issues and people that make Aurora tick, and now he can add “author” to his resume.

Johnston, recently retired from a job with the Provincial government, has now published his first volume of cartoons. Now on sale at Aurora's Bookworms & Co., as well as on Amazon, the book expands his canvas well beyond Aurora.

“Once I retired, it coincided with the arrival of COVID, so I had more time on my hands being retired – and a lot more time on my hands from COVID because you couldn't do anything,” says Johnston on the genesis of the book. “I had a lot of ideas for gag cartoons over the years but hadn't really followed up on them because I didn't have the time or an outlet for it.

“Using social media, I was able to draw something just for fun and see what kind of reaction I got from family and friends; I got a lot of positive feedback…and I just kept going, and thought, ‘Let's test myself and see if I can draw five cartoons a week.'”

Doing gag cartoons, he said, was somewhat “liberating” from the editorial cartoons he creates for The Auroran. As topics typically covered for the paper are municipal in nature, inspiration for the gag cartoons has been much wider ranging.

“You can let your mind just go all over the map,” says Johnston.

Johnston joined The Auroran as a cartoonist and columnist shortly after founder Ron Wallace established the paper in 2000.

Launched in the heat of a municipal election campaign, his first cartoon naturally focused on the mayoral race and depicted candidates going door to door trick-or-treating.

“I remember spending an inordinate amount of time on it because it would be the first thing I published,” he said. “At that point, for me, it was a very detailed cartoon – but my cartooning has evolved over the years – it's still simplistic, but it's ‘better' simplistic.”

Over the last two decades, Johnston's editorial cartoons have gained quite a following.

He looks back with a laugh on a letter to the editor praising his viewpoint on the community, suggesting he run for mayor. While he kept the headline for his scrapbook, he says it's “much more fun being on the sidelines.”

“That's what editorial cartooning is all about: it's to get people thinking. It's not to be nasty; it's hopefully, in some cases, to be funny – and to get people thinking about certain subjects in a new light. All four mayors I have cartooned about – Tim Jones, Phyllis Morris, Geoff Dawe, and Tom Mrakas – have all asked for cartoons over the years. It's very gratifying to know that they appreciate the work I do.”

As his new book is subtitled “Volume 1,” Johnston is leaving the door open to a Volume 2.

“It's fun to see it out and it's really neat to have something you have published in your hands,” he says. “I hope readers find it enjoyable – the cartoons are mostly meant for fun, to lift people's spirits, maybe get a little thinking involved, and I hope they laugh as they go through it.”

A Collection of Scott Johnston Cartoons: Volume 1 is available now from Bookworms & Co. and Amazon for $24.99. Bookworms & Co. will host Johnston for a book signing at their St. Andrew's Village location (Yonge Street and Orchard Heights) on March 4, from 11 a.m. to 3 p.m.

Excerpt: Scott Johnston's first volume of cartoons is result of a life-long love of sketching - and COVID downtime.