Aurora Votes 2022: John Gallo seeks re-election in Ward 5: “Aurora needs someone who challenges now and then” 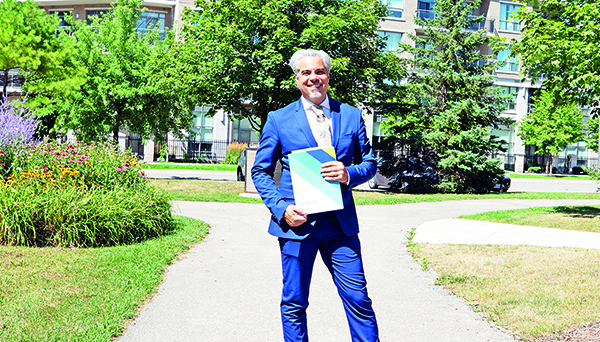 As the number of names on Aurora's Municipal Ballot continue to climb, this week The Auroran continues its traditional profile series of all candidates looking for a seat at the table. This week: incumbent John Gallo, who is seeking re-election in Ward 5.

Aurora needs someone “with some history” at the Council table – “as well as someone who challenges now and then.”

That's the view of incumbent John Gallo, who is seeking re-election to Council this fall as a Councillor representing Ward 5.

Gallo, who has served nearly ten non-consecutive (and eight consecutive) years on Council, says he feels he has contributed to the community and still has more to give.

One of his top priorities, he says, is keeping an eye on the Town's finances and how tax-dollars are being spent, “particularly in Capital projects during this term.”

“I think there needs to be some oversight,” he says, of many Capital projects, the spending of which he has critiqued during his time on Council.

It's a stance which has sometimes put him in opposition to the majority of Council but that certainly isn't a negative thing, he says.

“I think you need the voice throughout the term as ‘second thought' and I hope my Council members looked at me as someone who would bring that to the Council table: a different perspective for them to think about, particularly in our finances,” he says. “There are many projects I took maybe a different angle than the majority of Council members and I hope I provided a different perspective to help them make a better decision and try to do that at the Council table.

“It's frustrating at times because I believe some poor decisions were made and not in the best interests of the Town, but I have to accept majority rules and navigate that as best I can and try to convince my Council colleagues of the direction I believe we should be taking. Sometimes I am successful and sometimes I'm not.”

One of the projects he differed from the majority on was the redevelopment of Town Square, formerly Library Square. Keeping a focus on this ongoing project is something he says is a “highlight” of what he would like to bring to the table if re-elected, along with steering the Town's new Official Plan to completion, and a revised and updated Parks & Recreation Master Plan.

“There are two main areas I tend to focus on and spend a lot of time on [and that is] our finances and our public planning,” says Gallo. “Those are two areas that I tend, for whatever reason, to gravitate [towards] and try to fully understand what we're doing, the decisions we're making and the impact of those decisions – and continue to do that and, again, bring to the Council table, my thoughts on both of those topics, because they are two of the things that impact the Town but don't really go away.

“We spent a lot of money, it takes a long time to recover.”

Mr. Gallo, in his most recent term of Council, had reservations about Aurora ditching the outgoing at-large Council system where residents can elect up to six Council candidates to represent the whole community in favour of a Ward system. But, he's nevertheless signed up to represent the community he's called home for nearly 25 years.

“My view on the ward system is obviously it is very new and I still consider myself to be a Councillor for all of Aurora,” he says. “Every decision at the Council table is one for the entire Town, no matter where it is located, in my view. Obviously there will be a little more concentration on a particular geographic area, but our budgets, our capital projects, and I think it would be wrong to only be focusing on your area and not look at the bigger picture.

“I'm going to be focusing in on creating some events in the various parts because it is a rather large and populated area with a lot of parks and a lot of businesses and I want to tap into all of those, not only residents but the businesses along Bayview and understand their needs. There are things the Town can help them out with. That is probably one of the things I am going to enjoy while I'm there as a Ward Councillor; it is very difficult to do when you're a Councillor at large, representing the entire Town and it does take a monumental effort to go to every business and seek their input – or residents for that matter.

“I look forward to listening to them and getting my views out to the residents in the ward.”