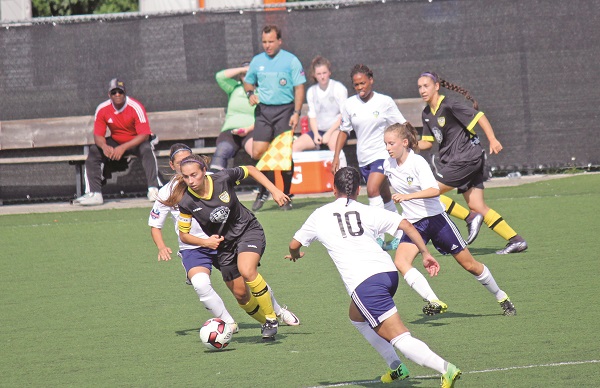 One of the most impressive teenagers in Canadian football put in a hat trick effort on Saturday to secure a whopping 9 – 2 win for Aurora United FC.

Sarah Stratigakis cemented herself as the team-leading scorer with notches at the 25, 38, and 49-minute marks, one of five Aurora scorers in by far the team's best offensive output of 2016.

“I think they did very well,” said Aurora coach Arman Mohammadi. “It was a good victory last week, another good one today, and we'd like to get two more to round off the season.”

Meghan Reynolds, Aurora's other leading scorer, opened the scoring just three minutes in on Saturday, adding another in extra time at half. Lauren Raimondo scored two of her own, and Kodee Williams and Laura Marelli each added a single.

“We came to get three points, had a plan to do so, and we did, so credit to the ladies,” said Mohammadi. “Tough conditions with the heat and everything but they played well and did what we asked for.

“In the second half, they took their foot off the pedal a little bit, but that's fine and we'll use this result to continue momentum. It was a good victory last week, another good one today, and we'd like to get two more to round off the season.”

Stratigakis, a regular on Canada's national under-20 team, was pleased with her team's effort so late in the season.

“I think it is important that we finish our chances and be more clinical in that regard and I thought we just played well together and our passing was on.”

The women have two games left on their schedule, and close out their home schedule next Wednesday against Darby FC (1-9-2) at Sheppard's Bush. Kickoff is at 8 p.m.

The Aurora men, meanwhile, are looking to start a successful run right until mid-October.

They earned their first win since early June on Saturday, besting the Kingston Clippers 2 – 0.

“The first half we came out and executed the way we wanted to play. We put quite a bit of pressure on them in certain areas of the field, and we had quite a strong half.”

“Second half was a different story; we had a bit of a sloppy second half, we weren't maintaining possession as much. We were giving the ball away in bad parts of the field actually and they created a few chances because of it. We were fortunate not to concede. But, I thought overall it was a good game.”

Regardless, Aurora moves up a spot in East division standings with a 2-11-3 record, good for sixth in the eight-team division. Their next opponent will be Durham United (10-3-2) on Saturday at Sheppard's Bush.

Excerpt: One of the most impressive teenagers in Canadian football put in a hat trick effort on Saturday to secure a whopping 9 – 2 win for Aurora United FC.