Aurora student is Trent’s Rookie of the Year 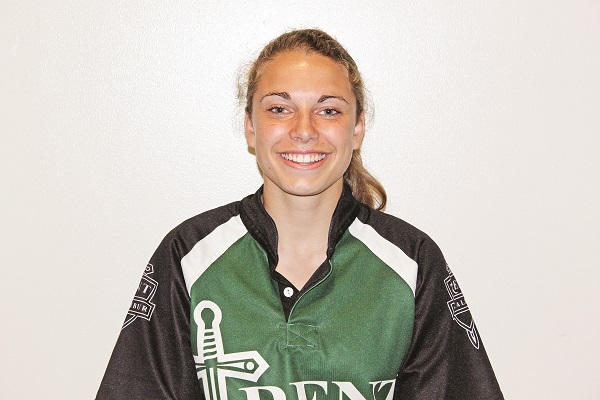 Allison, 18, was given the distinction of rookie of the year for the Trent Excalibur women's rugby team.

She faced some stiff competition for the award as her team fielded 15 rookie players for the 2012-2013 rugby season.

“I was definitely surprised,” she said about receiving the award. “We had a really young team this year so there were a couple of rookies who were always playing on the field and definitely really good players. I was kind of taken off guard because I was picked out of some really competitive people.”

It was a combination of hard work, opportunity and playing for a rebuilding Trent squad that helped Allison have a strong year on the field.

“I started every game, which is good for a rookie, but I gave it my all and every practice I always tried to prove to myself so that I did earn my spot and I wasn't just given it because they thought I was good – I wanted to prove myself.”

A former Aurora Barbarian on the under-18 rugby club, Allison said that experience was crucial in helping her make the next step into playing on Trent's varsity squad.

“I learned so much with the Barbarians team,” she explained. “My high school team was obviously great and taught me as much as they could, but playing at a club level, it's just takes you to the next level and you learn so much. My coaches were awesome.”

For those looking to take the same path, Allison suggested getting involved in club level rugby to hone their skills as early as possible – even if you are in grade nine.

“You learn so much and really develop your skills over the summer and you don't have to worry about losing your skills and having to start over, especially when it's your first year,” she said. “For grade 12s who want to go to university to play, make sure you contact the coaches to get yourself known and get your name out there so they can come watch you and know that you want to be on that path.”

In fact, Allison still sees club level rugby as important to her development and will be returning to Aurora to play on the senior women's Barbarians rugby team this summer.

In the meantime, Allison is finishing up the first year of the nursing program and has comfortably settled in to her new school and living space.

“I like how it's like a small community here,” she said. “I'm really close with the teammates, they're like my family and I see them everywhere on campus.

“The athletic program is really good. During our season we have lots of practices and stuff, but I like how during our off season we have our trainer and gym schedule that we have to follow and I like to always put all my effort in, because technically there's no one watching you do it, but the onus is on you to make sure you get in your workouts and make sure you keep in shape for the next season.”

She has also been successful in finding the important balance in school and sport.

“It's definitely demanding. I pretty much make sure I got my homework done, that's the main thing. Because if you don't, you get behind in school and you can't play the next year because you don't have very good grades. Pretty much my schedule was classes during the day, when I got home I would do my homework quickly, go down for dinner, then go to practice and then go home to sleep and repeat the next day.”

A tough challenge for sure, but one Allison is up for.

“You can definitely do it, you just have to time manage and get your homework and stuff scheduled out so that when you have to go away on weekends for games you don't have to worry about your homework.”

As for what lies next for Allison, she still has three more years at Trent and looks forward to the challenge that lies ahead with helping to get her team to the next level.

“We're going to build for next year and grow stronger together because there are so many of us that are going to be continuing on,” she said.

“I just want to see Trent succeed. For the next three years I'm there I want to see us keep getting better and raise the bar every year, getting more competitive and building upon what we started this year. The only way we can go is up.”