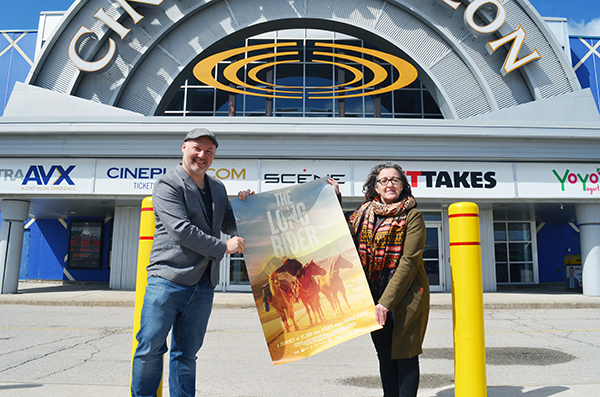 The Aurora Film Circuit (AFC), is a non-profit organization which brings film festival favourites from around the world to local audiences, but on May 9, they're set to light up the Aurora Cineplex with an international trek – with a local twist.

The Long Rider focuses on Filipe Leite, a Brazilian-born aspiring journalist living in Canada who decides to travel back home from his adopted city of Calgary – on horseback.

“Felipe shares his passion, his love, his fears, his heartaches and he really draws in the audience,” says Nelia Pacheco, President of the Aurora Film Circuit. “I felt like I was sitting with him on this journey. It's uplifting and a reminder that we all have dreams and they're possible.”

A return to in-person screenings has been a dream that has sustained the Aurora Film Circuit over the last two years. Although programming has continued virtually, there is something very different about sharing a film in a darkened theatre, sitting shoulder-to-shoulder with others and sharing the journey together.

This first screening of the new season, says Ms. Pacheco, was to “test the waters” on whether patrons and subscribers were comfortable returning to theatres at this point in time, and the answer was a resounding yes with tickets selling fast.

“The response has been such an excitement to get back in person and see films in person,” she says.

This excitement is shared by director Cisterna who has also missed the camaraderie of in-person screenings.

“I think we're all yearning to have real audiences,” he says. “It's the perfect opportunity to once again unite with an audience and have that connectivity.”

These local connections sparked The Long Rider in the first place.

Cisterna went to high school with Filipe Leite and when he and his horse began their trek, it was a journey Cisterna followed intently.

“I followed it in real time knowing that when the journey was over it would make for a really incredible and inspiring story,” he says. “I reached out to him to see if he wanted to partner on this project and thankfully, based on our past relationship, he thought it was a natural fit for us to bring it to life.  To see that pace and that scope really allows you to connect with your fellow human – and whittling it down to 90 minutes, I felt like I was on the journey experiencing life in the same way that Felipe did on his journey. It has been a very dark past couple of years, so this is a wonderfully uplifting story of hope and inspiration and I think it just allows an audience to escape for an hour-and-a-half and go on this remarkable journey and feel good afterwards.

For ticket information related to the May 9 screening of The Long Rider, email aurorafilmcircuit@rogers.com. The screening at Cineplex will be followed by a live question and answer session with Cisterna and Leite. The Aurora Film Circuit's next screening is slated for June 13 with the 2021 feature Wildhood.