“All those boys who never came back. I wonder if it was worth it.” 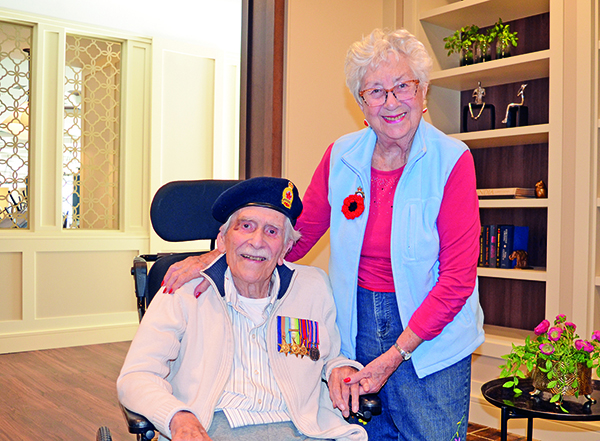 Few people today have living memory of what went through the minds of soldiers as they prepared to storm the beaches of Normandy.

Were they pumped to set foot on the shore and take on the enemy, or were their minds elsewhere – perhaps thinking of their sweetheart, a parent, or brothers and sisters back home, wondering whether they would ever see them again? Maybe a little bit of both?

Even fewer survivors, thanks to the sands of time, can give us insight on the silent individual battles that were felt as the ships gave way to water – but Joe Durkin is one of the few.

Now 98 and living in The Meadows of Aurora with his wife of 73 years, former “Land Girl” Alma Durkin, “95-and-a-half”, Durkin smooths his snow-white hair proudly make way for his beret as daughter Jennifer pins on his medals with equal pride.

It's a conversation that would have been unfathomable to the men like Joe who were just waiting to land on Gold Beach on June 6, 1944. They were simply doing their duty – yet another mission, with no possible inkling of how pivotal and historic the next minutes, hours, and days would be for themselves and the rest of humanity.

“It wasn't a matter of ‘wanting' to be,” says Joe of becoming involved in the war effort. “I was in the Welsh Guards and once you became 18 they got you and that's where I came in. I asked to get into the Navy – I just fancied the sea, really, and I went to a naval training camp and then onto the ships.”

Alma adds his father thought he was “daft” to join the Navy “because there's no back door on a ship” but Joe persisted.

“First it was training in Britain and then I was shipped to many different places, including the Far East,” says Joe. “I was scared to death. You're always meeting the enemy somewhere.”

Part of his duties in his role as Stoker was to keep the ships firing as he and his crew sailed minesweepers into different European ports in the dark of night.

By the time of what became known as D-Day, he was in a landing craft.

He and his fellow servicemen were not privy to what was planned until the morning of, he recalls, and as the hours ticked down, so too did the anticipation of learning what would be required of them – and Joe's tasks included operating an anti-aircraft gun to protect the landing troops.

As such, he wasn't among the first to make the landing, but he kept those who came before him as safe as possible until his turn came – and, just days after landing, he found himself next to Winston Churchill who made the journey across the Channel himself to see the success of the mission.

“I have been grateful since I was a little tiny girl in my Brownie uniform, attending the Remembrance Day services, just thinking about what the effort that all the allies made from all different countries to basically give us the opportunity to be free from Nazi tyranny,” says Jennifer with pride.

Adds a beaming Alma, “Without all these guys we wouldn't have beaten them – without being there and fighting on those beaches.”

Alma has shared this pride for nearly three-quarters of a century.

While Joe was serving in the Royal Navy, Alma was an active member of the Women's Land Army, which kept farms and food supplies rolling throughout the war. It was there she met a girl about her age and they became fast friends.

When the Women's Land Army disbanded after the war, they stayed in touch and Alma's friend asked her to serve as her bridesmaid.

“At the reception I was alone because I didn't know anybody, I was just sitting there like a dummy all evening and my friend came and asked if I was all right. I said, ‘No, I'm not – where are all the nice guys?' She said, ‘Hold on a minute. I'm going to get my Uncle Joe.' I thought, don't bother bringing over your old uncle, but she came back hauling him and I thought, ‘This looks better.'

“He was very nice and I thought we were getting along wonderfully, we were having a great time, and suddenly he looks at his watch and says, ‘Sorry, I've got to go,' and he left. I was dumbstruck. I was really fed up. Then, in the next hour he came back and that was it.  I was highly insulted. ‘Where do you think you were?' He said, ‘I'm sorry, I needed to take my mother home.' As soon as he said that, everything fell into place and I could see he was a really nice guy. I was right – he's perfect!”

As Remembrance Day 2022 becomes part of history for another year, the Durkins say it is important for people to Remember not just on November 11 but all the time.

“They are in danger themselves,” says Alma. “They might be oblivious to it because they are in danger as we never know the second some man like Hitler, a man like that with crazy ideas waiting to come and ruin everything for everybody. You don't notice it until maybe it's too late. You've got to be more aware from the beginning and not let it happen because you think it can't happen; everybody's so sane and we know better today. No, nobody knows better. The people have forgotten what it's like. They have forgotten what war is like. It's terrible.”

Excerpt: Durkin’s family have no doubt his service mattered