AHS’ Ultimate Frisbee feels the Rush ahead of Monday’s finals 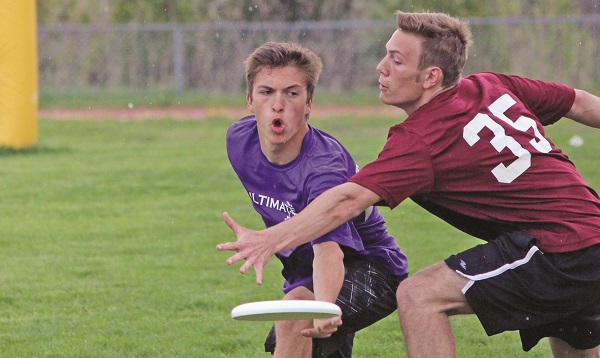 It has been a slow start to the 2014 season for the Aurora Blue Jays senior men's baseball team, but at least it has been a productive one.

The veteran laden squad has dealt with a series of rain delays, giving them a record of 2 – 1 since the season started at the beginning of May.

But, last week the Jays' had a few victories to be happy about in a game against the Nobleton Cornhuskers.

“We got Brent [Owen] out on the mound, which is great, and we got another one of our new players in the lineup, Brent Crosby, who hadn't had a chance to crack the lineup yet,” said Jays' manager/player, Rob Wilson. “He came in and he's definitely showing a lot of potential. We're excited to have him on board. And it looks like our players are starting to come around, too.”

It was Owen's first start of the season and he was lights out, working five innings with one run, one walk and four strikeouts.

On the other side of things, the offence exploded for 11 runs in just six innings of play. But the game was much closer than the scoresheet suggests.

The Jays scored three runs in the first inning, but the Cornhuskers buckled down from then on, until the Jays took a commanding lead in the sixth inning with six runs.

“It was just one of those games where it was probably closer than it should have been for the first few innings and then we were able to rely on the fact that we knew we could do some damage sooner or later,” said Wilson.

“We're comfortable playing in those tight games because we know our defence will keep us in it and we know our bats will more than likely provide that power to scratch a few runs out.”

The Jays came up with 11 hits throughout the game and were led off by speedy infielder Chris Bloom, who had two hits (one double) and two runs.

The Jays new additions also continued to show their value, with Dan Lehmkuhl and Brad Crosby also getting two hits.

“It would be nice to get the offence going in a good rhythm,” added outfielder, Mike Keon. “Some of our top hitters seemed to come around, which was good to see. Bloom hit well and Lehmkuhl looked good at the plate as well.”

Crosby also pitched a solid sixth inning to close out the win for the Jays, which is something the Jays will hope he can help out with all summer.

As for pitching, Keon said the slow start to the season has been toughest on the pitchers

“It's been tough for them, probably even more than all the position players, with all the rainouts, because you can't get people stretched out until they've had a chance to pitch two or three games,” he said. “We've got five or six guys that we want pitching and Owen was supposed to pitch over a week ago.”

The Jays will now look to start a mini win streak when they face the Barrie Angel this week at Lambert Willson Park.

“They're a decent team that can sneak up and bite you,” Wilson said. “We expect them to come out strong and they're always a team that plays us hard.”

For more information on the Jays or the North Dufferin Baseball League, visit www.ndbl.ca