VOTE 2014: Growth geared towards grown-ups is a vision for candidate Ian Clark 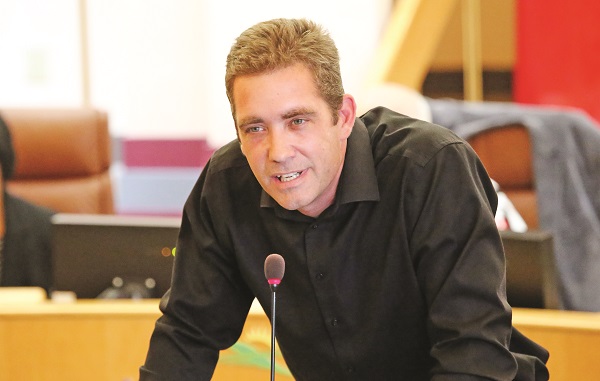 A lot can happen in a decade or two – just ask Aurora's Ian Clark.

Mr. Clark, a 12-year resident of Aurora had his first taste of the Town as a border at St. Andrew's College. A software engineer by trade, the London, ON native has moved back to his old stomping grounds, raising two children with his wife…and watching the green space he came to love disappearing.

“To be honest, I was complaining so often [about growth issues] that when I came home to my wife, she finally said, ‘If this bothers you so much, why don't you run?' So I did,” says Mr. Clark.

Surveying development over the last decade or so, Mr. Clark says he's seen plenty of growth but is less sure about how much planning has actually gone into it – and this doesn't include growth already underway, but anticipated growth as well.

In putting his name forward as a Council candidate in the October 27 municipal election, Mr. Clark says his campaign platform is threefold, often looping back to ensuring people are moving around Aurora, particularly in the Downtown Core.

Aurora's Downtown was an issue he really started to notice when bricks began falling off a now-demolished plaza, now the site of the Centro condominium complex currently under construction.

“This was supposed to be the centre of Aurora and I would see stores closing and wonder why,” he says. “Then, when the big box stores opened by the highway, I could tell immediately that any business on Yonge Street was going to have a hard time competing with them. I heard people say Yonge Street was looking really seedy, and it was a shame.”

In asking himself why businesses were trending away from Downtown, Mr. Clark says one of the paramount problems is a shortage of parking.

“One of the things we need to do is bring the people who don't need cars to Yonge Street to support businesses there [through] more high density living like condo units with some shopping venues built on the bottom floor, and then you would be bringing people to the actual neighbourhood itself without cars and a little foot traffic might go a long way to support businesses that are there,” he says.

“Businesses that would support the local population would thrive, those who couldn't compete with the Walmarts or Targets would close down, but hopefully more businesses catered to residential or local residents would be able to open and thrive.”

Another component of this vision is fostering what he describes as an “adult entertainment district” on the main drag consisting of restaurants, places to go to after work, either with your spouse or whole family, instead of having to go up to Newmarket or down to Toronto for a full evening out.

“I think our population is getting to the size where this is feasible,” he says.

As population grows, however, Mr. Clark says this will only go towards compounding an escalating traffic issue in Aurora. Looking ahead to the full development of Aurora's 2C lands, Mr. Clark says he foresees the corner of Leslie Street and Wellington Street becoming a particularly “dangerous” corner within Aurora. To this end, he supports efforts to persuade the Provincial government to alleviate this problem by constructing an interchange with Highway 404 at St. John's Sideroad.

“I would be 100 per cent in favour of it just to move some of that traffic north to come in and out of Aurora,” he says. “My focus would be on Yonge Street to begin with and then to improve the infrastructure of our Town to handle our growth. I think our biggest challenge [over the next four years] will be maintaining service levels across the board. With the population increase it will see stress on everything. The roads will deteriorate faster. It will take more sand and salt in the wintertime, more repairs, the fact is we're just bigger. [We need] to be sure that all the services that are currently offered, that standards of service can be maintained as the population grows. I think we might be a little behind the ball.”

As a child, Mr. Clark attended summer camp with the sons of Pierre Trudeau. While there, he and his fellow cabin mates had the chance to have dinner with the then-Prime Minister. Mr. Clark describes himself as “awestruck” in meeting Trudeau, who complimented the young Ian on his bilingualism. Looking back, he says it was the first time he really felt proud to be Canadian.

While he might have issues with individual Trudeau policies, he found the man himself inspirational, intelligent and honest – things that have inspired him to take on this journey himself.

“I have a desire to get to know this community and to figure out what the community really wants, but at the same time being able to maintain a big picture focus and not be drawn into some of the smaller issues,” says Mr. Clark. “At some of these events there has been a pet cemetery mentioned, and I know it might upset people but I don't see that as a real issue to be considered in this election.

“They mention it as being a potential tourist draw but I don't really see that. I am more interested in the macro issues of this town, maintaining infrastructure in the face of our growth, trying to make sure the businesses on Yonge Street can remain viable.”

Excerpt: lot can happen in a decade or two – just ask Aurora’s Ian Clark. Mr. Clark, a 12-year resident of Aurora had his first taste of the Town as a border at St. Andrew’s College. A software engineer by...