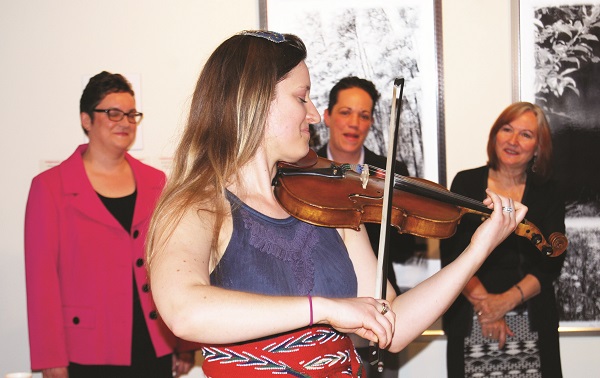 Next Saturday, June 21, is National Aboriginal Day, and if you have the chance to spend the previous evening at the Aurora Cultural Centre, it is likely the sights and sounds of indigenous culture will still linger in your heads.

These are the sounds that have followed Alyssa Delbaere-Sawchuk throughout most of her life. On June 20, the Metis musician and artist will make a debut of sorts at the Aurora Cultural Centre with Memere Le Colibri.

A celebrated fiddler who has won accolades at the Canadian Aboriginal Music Awards and the Canadian Folk Music Awards, she combines her talent on the strings with the talents of performer Jess Salgueiro and artist Jacinthe Roy, for an elaborate evening of art to stimulate just about all the senses.

“The fiddlers of the next generation were adopting the Don Messer fiddle music that was becoming popular because they thought they were going to make a lot of money,” says Alyssa, noting the different approach to tempo taken by traditional Metis fiddlers. “The traditional music was being lost and Ann really went there to record and make sure the music survived.

“When Europeans brought over the music, there was typically only one fiddle player in the community. Because he was playing on his own, he could really improvise and be creative and our music really evolved in its own way. It is like the game Broken Telephone. The person before doesn't get to hear how the person afterwards is going to interpret what they passed on. There is the interesting evolution that follows with Metis music and it is an oral tradition.”

Recording these oral traditions for future generations is something Alyssa has become devoted to, looking close to home for material. Some of the stories she hears from her grandmother, for instance, are ones she has grown up with. But, in going in-depth with her, she continually discovers new details and nuances in what is being passed down to her.

“I try to pick her brain before it is too late,” says Alyssa. “The more I talk to her, the more things I discover about my own family. My grandmother's story is one about really seeing her mother be someone who was really strong who was not only raising children – she had 12 – but also working and keeping everything afloat. That was a strength that really carried everything along. Hearing these stories [and weaving] all of that together makes sense of who I am and who my mother is, and it creates a little bit of awareness of why I do certain things and why I am the way I am.”

When she takes the stage in Aurora on June 20, sharing her roots with the audience makes this one a very special performance in her mind because she is “exposing” herself in a very different way. While that might make some hesitant, she is looking forward to sharing with the crowds, and her grandmother, who will be in attendance.

She is also revelling in the collaboration that has come together to make the show a reality.

“It is going to be a little bit of a workshop because it is going to be the first time we are collaborating and we really hope to be able to do it again,” she says. “This is all about inspiring other people…and getting them to have a relationship with their past history, and have a better understanding of one's self.

“That is one of the things I hope that with this piece there will be a better understanding of people and identity.”

Memere le Colibri: A Fiddle Performance, begins at 8 p.m. at the Aurora Cultural Centre. Tickets are $10, or $35 for a family of four. For more information visit www.auroraculturalcentre.ca.