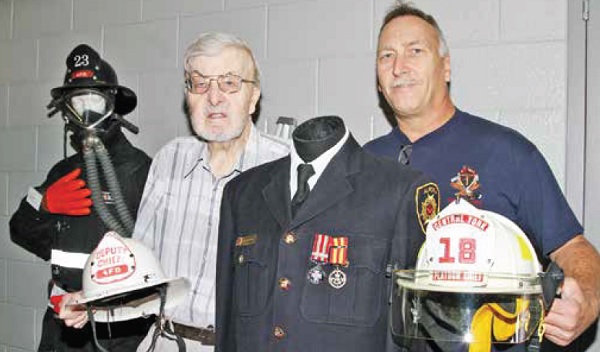 Don Patrick was “the loudest quiet man” you would ever want to meet, according to his son Brian.

That is how Brian will remember his father, a retired Deputy Chief of the former Aurora Fire Department, who died last week.

Brian is the third generation of his family to serve in the local fire department, which is now the Central York Fire Service, following his father and grandfather, and their influence was hard to resist.

“They were my biggest role models,” says Brian. “My dad ended up becoming my mentor in a lot of areas.”

It was the call to community service that bound the three men beyond blood. What was then a paid on call fire service, known ostensibly as a “volunteer” service, Mr. Patrick says in the days his father and grandfather served, it was more like a service club to the community of like-minded individuals wanting to serve the community. But, as the community evolved, so did the fire service and, in turn, the Patrick family's ties to it grew deeper.

Flags were lowered at Town Hall and at fire halls across the Central York Fire Services (CYFS) area last week in honour of Don Patrick, who died last Monday. Speaking at last week's Council meeting, Mayor Geoffrey Dawe paid tribute to the service of both Mr. Patrick and his family in their collective 108 years of community service.

It was a sense of loss also shared by CYFS Chief Ian Laing who invited Don and Brian to take part in their annual Open House this October. It was a special time, he said, not only representing three generations, but it also coincided with Brian's 35th year with the service.

“We are thankful to have people with that dedication,” says Chief Laing. “When we go back when Brian's father and grandfather started in the service, it was a very different set of circumstances. They didn't have the same apparatuses as we have…but there was no change in the level of dedication, just in the ways they did it. We have all grown and benefited from their experience.”

The Fall Open House also served as a way not only to pay tribute to Don, but also allowed him the chance to connect with the fire fighters of tomorrow who are training hard in colleges across Ontario.

“He spent a great deal of time conversing with them about the way things were and opening their eyes to how different it is today compared to what they had to go through when he was on the job,” says Chief Laing. “It was a great educational experience for those recruits and many of them were engaged in conversation with him. He really thought that was the highlight of the day – although I had hoped his highlight would be sitting in our new aerial truck! He really relished sharing his history with those who were up and coming.”

But what if the one who was up and coming was your own son? It was clear from early days that Brian was going to follow in his footsteps, with his first job working alongside him at local arenas, learning the ropes on how to prepare the ice before Tigers games, and tangling with temperamental Zambonis.

He eventually followed his father into the fire service in 1977 and, in his own words, never looked back.

Describing his father as the “loudest quiet man I had ever met”, he says his words of encouragement were often a head nod or a pat on the back, but rarely spoken in the traditional sense.

“My father could communicate with people without speaking,” says Brian. “He was just one of those people who led by example. Very seldom did he complain openly or outwardly; he certainly shared his views with the family, but he just went in and gave it his all no matter what he was doing. What is happening this week speaks volumes and is quite a testament to what he was all about. My mom hasn't stopped shedding tears of pride for my father since he passed.

“The thing that stands out most in my mind than anything is the love and devotion he had for my mother and our family. Right up until last week when he was still able to communicate, it was the same thing, ‘You look after your mother.' ‘I'm on it dad. I'm all over it.' Right up to his last breath on this planet on Monday, we reassured him that my sister and I were standing beside mom. ‘We've got her, pop. She's in good hands.'”

Don Patrick is survived by Monica, his wife of 56 years, son Brian, daughter Sherri, three grandchildren and one great grandchild.

Excerpt: Don Patrick was “the loudest quiet man” you would ever want to meet, according to his son Brian. That is how Brian will remember his father, a retired Deputy Chief of the former Aurora Fire Department.