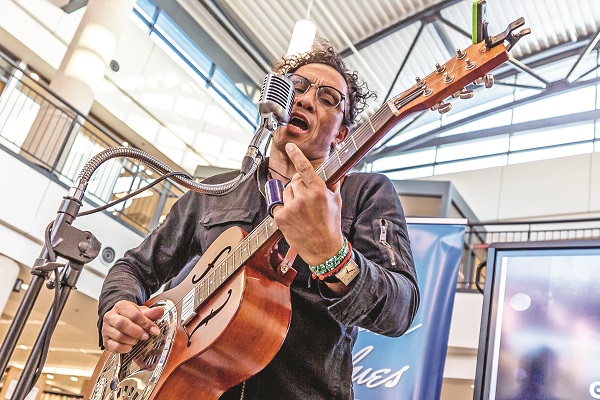 Music Aurora will give a warm welcome to the Leap Year with some cool blues this February – kicking off more than a month of music programming leading up to the Aurora Winter Blues Festival.

The countdown to the 2020 Aurora Winter Blues Festival (AWBF), which will take place March 20 and 21 at Theatre Aurora, kicked-off Wednesday at a special event hosted by AWBF partner organization The Aurora Public Library.

Musician Glenn Marais was on hand Wednesday to give Festival supporters a flavour of what's to come ahead of his performance on Friday, March 20 when he will take the stage with “Samantha Martin & Delta Sugar.”

The second night of the AWBF will feature headliners “Harpdog Brown & The Uptown Blues Band”, along with Sugar Brown and his band.

But that's just the finale; the Aurora Winter Blues Season will kick off Saturday, February 29 – a date that comes around just once every four years – with the annual Blues Bash, benefiting Music Aurora programs, with headliners The Pick Brothers Band featuring James Marrin & The Midnight Riders.

If you're a leap baby, you're in luck. If you can prove you were born on February 29 and are over the age of 19, your ticket is free – otherwise, each ticket is $55, including GST.

Preceding the Blues Bash will be the first of two pop-up concerts at the Aurora Public Library, the first of which will take place on Saturday, February 22, entitled “Let's Blues it Up” and the second, “Get Your Mojo Going”, on Saturday, March 7, with each performance set to take place in the Library Living Room.

“The Aurora Winter Blues Festival has been recognized as one of the Top 100 festivals in Ontario and this year it is bigger and better than ever,” said Reccia Mandelcorn of the Aurora Public Library. In collaboration with Music Aurora, the Aurora Public Library will be hosting two free pop-ups in the living room. This is a wonderful opportunity for people of all ages to come and enjoy music. I really encourage you to bring your children and grandchildren because how often do you have the opportunity to hear wonderful musicians when you can wiggle in your chairs, walk around, read a book, colour, and still be exposed to culture? I hope everyone will come out for workshops and for the pop-up blues performances.”

In addition to the pop-up performances, the Library will also host free music workshops in conjunction with The Arts Music Store, including a beginner's workshop for guitar, offered to all ages, a brand-new workshop entitled “Guiding Improvisation” which will explore the connection between music and emotion, and a final workshop on “Live Audio Engineering” which will give participants a crash course in what it is like to run a live music show.

“Music and libraries definitely go together because they are both about human connection and in conjunction with the Ninth Annual Aurora Winter Blues Festival, Music Aurora and the Aurora Public Library are thrilled to announce a free mini-concert here in the living room that we're calling Giving Back to the Community,” added Ms. Mandelcorn. “It will feature an award-winning Canadian music artist. I know who it is, you don't, I'm not telling – but it is totally worth coming on out on Saturday, March 22 from 1.30 – 3 p.m. We hope you will join us in the Living Room for music, community and refreshments.”

Seniors, note organizers, are particularly encouraged to come out for this free event.

Before the final concert at the Library, Theatre Aurora will be thumping as the AWBF's main stage.

“On Friday, March 20, we're back at Theatre Aurora,” said Greg Smith, Acting President of Music Aurora, noting that Mr. Marais has a number of surprises in store for the evening, along with bringing out budding Aurora musician Louisa Barbosa up on stage to perform.

“On Saturday night – and we have been looking to make this happen for probably three years now – we have Harp Dog and the Uptown Blues Band. They are from Vancouver, so as you can imagine, it is difficult to bring bands from distances because of travel costs and hotel costs, but they really wanted to perform and wanted to come here to this Festival because they have heard so many wonderful things about it. We think it is going to be an amazing night of entertainment.”

For more information on the 2020 Aurora Winter Blues Festival, including event tickets and registration, visit www.musicaurora.ca.