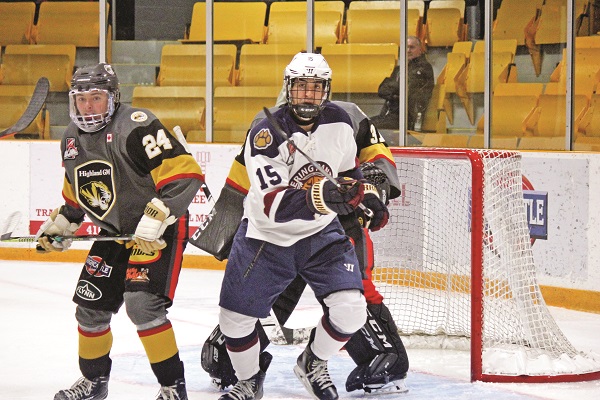 The Aurora Tigers are banking on some changes behind the bench to point them back in the right direction.

Following a fresh four-game losing streak, culminating in a pair of losses to the Pickering Panthers and Stouffville Panthers this weekend, the Junior A club on Sunday relieved general manager and head coach Rob De Fulviis of his duties.

“Our organization and @Town_of_Aurora would like to thank (De Fulviis) for his hard work and dedication,” said owner Jim Thomson in a tweet through the team's account.

An ex-professional himself that retired following the 2017-18 season, De Fulviis was the man behind the wheel on what has been a historically poor season for the Tigers, managing just four wins at almost the halfway point.

He is replaced by a pair of familiar faces in both roles, with Daniel Giammarco taking the reins as the new general manager and Jim Wells Jr. replacing him as head coach.

A former Toronto Marlboros executive, Giammarco takes on the head position as the former associate general manager, while Wells Jr. moves up from assistant coach to the head honcho.

Wells is certainly no stranger to the junior hockey arena: though a longtime coach of the York University Lions, he has on multiple occasions been behind the bench of the Newmarket Hurricanes, a franchise his father helped start in the 1980s.

Both men take over a tall order in the on-ice talent: the Tigers allowed a combined thirteen goals in two losses over the weekend, cementing their position at the bottom of the OJHL standings.

The Pickering Panthers first beat up on the Tigers on Friday night, riding a 42-shot performance to a 7 – 3 win.

Goaltender Andrew Barwinski was left out to dry in a game that was a runaway from the start, with Pickering first getting on the board just over three minutes into regulation.

Sebastian Tamburro provided two of the Aurora goals, while newcomer Landis Antonic provided the final, a much-welcomed spark plug in his four games so far as an Aurora Tiger.

He continued his point streak in picking up an assist in Saturday's match with the Stouffville Spirit, though a 6 – 3 loss was all the Tigers could muster against the North division's top squad.

Special teams was clicking for the Tigers, with both Tamburro and Jonathan Balah finding the back of the net on the powerplay, though not much else was with Stephen Li notching the only even strength goal.

Barwinski fared no better in stopping 26 shots of the 32 he faced.

For Wells and his team, the going gets no easier: a rematch with Stouffville comes up this Friday at the Aurora Community Centre, set for a puck drop of 7:30 p.m.

The home stand continues on Saturday in hosting the Markham Royals, who sit behind the Spirit and the Collingwood Colts in the OJHL's North division standings.

As for the Tigers, a record of 4-18-0-3 has Aurora well out of contention, and in a battle with the Lindsay Muskies for the basement of the league.