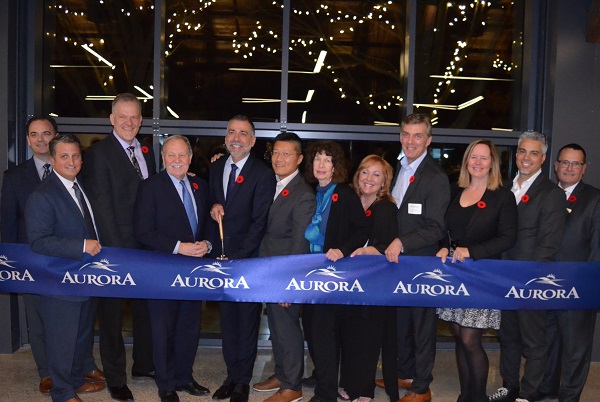 A new chapter has officially begun in the story of Aurora's Historic Armoury.

On Wednesday, community members gathered at the former Victorian drill shed at the corner of Larmont and Mosley Streets for its rebirth as the newest campus of Niagara College's Canadian Food & Wine Institute (CFWI).

Commissioned under Queen Victoria in the 1870s, the building was home to the Queen's York Rangers regiment for more than a century. Under the restored original timber beams, evidence of the Armoury's past was evident as more than 150 people toured the sparkling new facility, sampling beer and wine made by CFWI students, hors d'oeuvres created under the direction of Soohyeong Lee, and even a bit of pasta made by Mayor Tom Mrakas in a demonstration in the building's new state-of-the-art teaching kitchen.

From the perspective of the Town and Niagara College, Wednesday's ribbon cutting was much more than an unveiling, it was the breaking of bread over an important new collaboration they hoped would become a standard between municipalities like Aurora and post-secondary institutions like Niagara College.

“When the Council of the 2010 – 2014 term purchased this building, there were many discussions about what it could be,” said Mayor Tom Mrakas from a podium set up in the large open area designed to be used as community space. “Everyone knew that this building was something special and we needed to do something monumental. The 2014 – 2018 term of Council was presented with an opportunity to renew and repurpose the Armoury and bring new life into the downtown core through the transformation of the building as a post-secondary institution. What an incredible transformation it is.”

Looking up at the original wooden ceiling, alongside the new roll-up doors on the west side of the building that now connect the Armory to Town Park, the Mayor said, “I know we have done something truly special here.”

Paying tribute to former councillor Paul Pirri, who was instrumental in beginning discussions between the Town and Niagara College, Mayor Mrakas said bringing a post-secondary presence to Aurora fulfils a key mandate of the Town's Strategic Plan.

“We know that universities and colleges bring not only economic benefits but social ones as well,” he continued. “They foster a community and bring people together. When we approached Niagara College and began discussions about having them make Aurora their first campus in the GTA, we knew that we could work with them. We knew we were on the same page and we would be able to create a shared vision for both the college and the Town. As soon as Niagara College saw the Armoury, they knew that this was the right place for them to begin their expansion into the Greater Toronto Area.

“They wanted to create a state-of-the-art facility in a place where they could not only continue their work as an internationally-celebrated culinary school, but where they have become part of the community. They saw the potential of this building and our downtown core in the same way that we did. Our vision for what that space could mean for our community aligned perfectly with their desire to be an integral part of our town and be part of something bigger than just a post-secondary institution.”

These views were shared by Dr. Dan Patterson, President of Niagara College.

Speaking to the assembled crowd, Dr. Patterson dubbed the finished product “spectacular” and said he was looking forward to a “great partnership.”

Following Dr. Patterson's remarks, Craig Youdale, Dean of the CFWI, said that throughout the process he was struck at how “excited and passionate” Aurora was in bringing something “unique and special” to the community.

When he first visited the Armoury, when it was just a drill shed, Mr. Youdale said he did not necessarily see in his mind's eye how it would all turn out, but they knew that this was a space they “really wanted to be a part of.”

“We were really excited about the history and from Day One when we met with the Town and met eventually with [the architects from Gow Hastings] we wanted to make sure history was an important component of the development,” he said. “Aside from being part of the community and having a space that was accessible to all, we wanted to make sure that the history of this amazing space was not lost and that this incredible building…will continue to celebrate the history of this space and what it means, and it is not lost to me that we're all wearing poppies today.

“The planning, construction and implementation really was a challenging and different process for us. Normally when you embark on something of this scale, one of your first steps to look to the other projects that are the same and to the other buildings that are similar, the other partnerships that have a similar pedigree. The reality is there is none. This is really, truly a unique element in so many ways: the history of the building, the partnership between the municipality and the college, the actual diversity and use of this space that all those in the community will be able to be here and enjoy it.”

“This is a ribbon cutting and opening to not just a partnership but a really exciting partnership I think will become a template for municipalities and communities across the country. This really is an exciting and unique space and I can't wait for all of you to come and use this space.”

Added Aurora CAO Doug Nadorozny: “I believe this is an exceptional partnership and one that is going to flourish over the years to come and be a model for partnerships between post-secondary institutions and communities. We are very proud of the partnership we have started and the fact that the Canadian Food & Wine Institute has been able to expand into the GTA market through this Aurora location. Our ability to work together with an organization like Niagara College to create this space is something I know will be the envy of many municipalities as word gets out.”