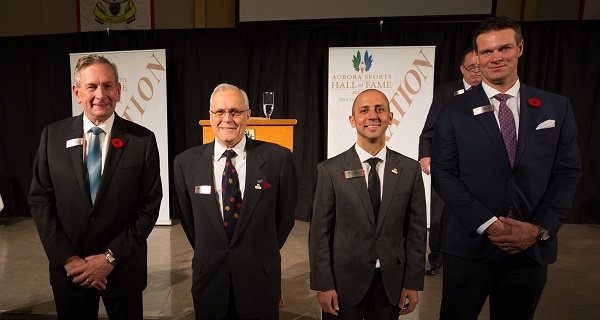 Reg Chappell, Jim Clark, Travis Romagnoli, and the father-son duo of Dave and Ryan Gardner were the latest inductees into the Aurora Sports Hall of Fame, honoured at the annual induction dinner on November 7.

St. Andrew's College was the host venue for the fifth year in a row, where close to 300 guests packed into Cole Hall to see the class don the traditional green sweater now worn by a total of 34 honoured members.

“This celebration highlights the achievements and hard work of each inductee, and their contributions to sport in our community,” said Mayor Tom Mrakas. “Your strong focus, perseverance, and diligence are great qualities for everyone to adopt.”

Mr. Chappell was the first to take to the stage, a household name among the local swimming community and a founding member of the Aurora Ducks.

“Passion and people were a major part of my success,” said Mr. Chappell, who recounted a story of one of his earliest memories at the beach at three-years old.

“There was a sign, out in the deep of the water, I started walking towards it, and my dad had to come grab me to keep me from drowning. He then had to tie me to the picnic table to keep me from doing it again…I wanted in the water.”

He recalled many of the memories he had from his 56 years in coaching swimming, one that he only retired from last year.

“Last summer, at age 71, I stepped down from president and high-performance coach at Duck Swimming,” said Mr. Chappell, expressing his gratitude to those who contributed to the longevity of his career.

“A high-performance coach needs to continue to look at the base Aurora athletes are coming from.”

Mr. Clark was the next to hear his name called, an apt choice this year after his work with the CP Canadian Women's Open at Magna Golf Club earlier this summer. His resume includes 35 Canadian Men's Opens as a volunteer, where he has come to get to know the night's emcee Rod Black of TSN, prompting Black to add “Everybody loves Jim.”

“Being an Auroran, Magna has a very high presence in this community,” said Mr. Clark. “It's kind of like St. Andrew's…you just kind of drive by.

“I was proud I got the chance to chair the CP Women's Open there.”

Mr. Clark went on to address all of the many people involved in Golf Canada that were there in support, including those from his times volunteering at Glen Abbey when he was just a boy.

Adding to the lustre was the over $6,000 raised from the live auction, always a hit with the induction dinner crowd. Items included a signed stick and jersey from recent Stanley Cup champion and Aurora resident Robert Thomas, as well as a Toronto Maple Leafs game day package, and a Muskoka golf package with Black, who flung joke after joke to the crowd.

Always one for self-deprecating humour when hosting the event, Black had to make a poke at the absence of fellow TSN personality James Duthie, who has played MC for the induction in the past.

“It's a pleasure to be here,” said Black in his opening monologue. “Obviously James Duthie is busy tonight.”

On a more serious note, Black went on to add the significance of the night to the local sports community, something he has come to understand over the past few years.

“I know what it means to the community,” said Black. “I have a son that went here, to St. Andrew's College, my daughter goes to St. Max, I'm involved in the community here.”

Finally adding, as the joker he has come to be known as at the dinner:

This year's inductees will see their photos and bios brandished on the walls of the Aurora Sports Hall of Fame at the SARC, where the public is also free to see their collections of equipment, medals, and other memorabilia for a full calendar year.

A pair of St. Max Mustangs were also welcomed into the hall in the form of the Future Hall of Famers program, welcoming Lara Jorgensen and Brent Davison into the fold.

Jorgensen, the Junior Athlete of the Year at St. Maximilian Kolbe Catholic High School helped the girls hockey squad to back-to-back medal finishes in the last two seasons, while representing both Ontario and Canada in rugby, all by the age of sixteen.

Davison, who competes for the Mustangs in both rugby and swimming, earned triple gold swimming in his age level at the 2019 Ontario Youth Provincial Championships.

Next week, The Auroran will focus on the inductions of the Gardners, as well as Mr. Romagnoli.