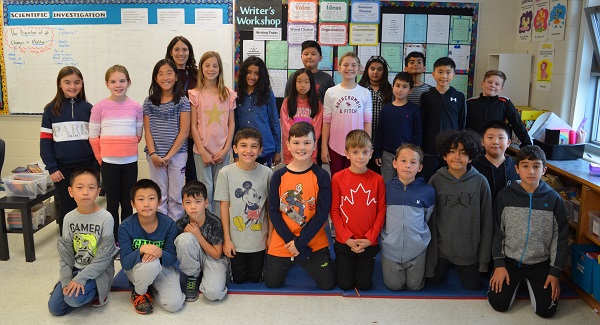 They've made a difference, and they're not stopping at the local level.

Grade 5 students at Hartman Public School, under the guidance of teacher Gina Shillolo, celebrated a victory last week as Council voted in favour of creating a garden to help urban pollinators, specifically the monarch butterfly, an idea they pitched to Council as part of a closer look at local government.

But, despite their victory in encouraging Council to plant a milkweed garden to feed the monarch butterfly, whose population has been on a steep decline in recent years, the students are not content to rest on their laurels; with their win in hand, they have their sights firmly set on encouraging upper levels of government, particularly the Province, to step up their game.

“We want to bring [monarch butterfly] populations back to where it was in 20 years,” says Felix Zheng. “Hopefully by having a monarch garden, they will be able to produce more butterflies and they will fly away and keep on producing until they are back in their original places.”

“They are basically doing the same (pollinating work) as bees and their numbers are decreasing because of smoke, cars and cutting down trees,” adds classmate Myles McKay.

Chelsea Donahoe says she and her classmates wanted to take this project on and advocate for it at Town Hall because the decline of pollinators has an immediate impact on the world around them.

“We wanted to see if there was something we could do to help and get more flowers because trees, without the pollinators, could die and then there's no more oxygen,” she says.

Julianne De Leo says they took their idea to Mayor Tom Mrakas and Council asking if they could do anything to help. If they couldn't, she adds, students would have shifted gears asking for permission to build one themselves.

“We brought this idea to the Mayor and Council because they are the ones who can actually help us,” says Olivia Yoon.

Now that they got a helping hand following unanimous approval of Councillor Wendy Gaertner's motion to begin work on an urban pollinators' garden, possibly at the site of the planned Aurora Wildlife Park, a short distance from their school, students are still getting used to the idea of being real difference-makers in the community – and they are wearing that title with pride.

Adds Chelsea, “I think we should try to convince them to actually want to do something and that it is a good cause.”

“If our plan works,” agrees Colin Voloceai, “this might encourage others to do the same thing in Ontario. If the Provincial government sees this, they might change their mind about helping us.”

As the students share their thoughts on taking their project to the next level or two, Ms. Shillolo looks on with pride.

“It's phenomenal to be a part of the journey and see it was their words that instigated what ended up being the final result,” she says. “We were invited to Town Hall to share ideas and to see that the municipal government is taking their idea seriously is and that is just remarkable. It is remarkable to see that actual government in action.”