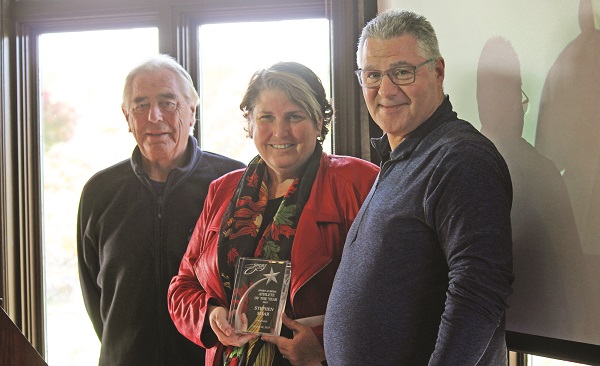 Although he may have been halfway across the world in Moscow, Stephen Maar was certainly at Saturday's Breakfast of Champions in spirit when he was named the Sport Aurora Athlete of the Year.

“I am very humbled and grateful to be accepting this award,” Maar said in an email exchange. “Not only as the individual accolade it is, but it represents the recognition of the community of Aurora in high performance sport.”

Now in its seventh year, the Sport Aurora's Mayor's Breakfast of Champions annually brings together Aurora's winning teams, individuals, coaches, and managers under one roof to celebrate Provincial championships or better within their respective sports.

Marr is the fourth athlete to receive the Athlete of the Year honour, first handed out in 2016 to hockey player Cameron Morrison, an ex-Aurora Tiger and current Colorado Avalanche prospect.

The honour went to Carmen Whelan in the event's second year, a celebrated Canadian gymnast and graduate of Dr. G.W. Williams Secondary School in Aurora.

For Maar, being the first in his sport to receive the honour, he said it means “all the more.”

“I want to extend a huge thank you first and foremost for my parents who afforded me every opportunity to cross train and play a variety of sports to settle into my niche,” said Maar. “Thank you to the Aurora Storm volleyball club, who gave me great coaching, facilities, teammates, and was the beginning of my career.

“Lastly, I wanted to give a personal shout out to Jeff Salhani, my elementary gym teacher, someone who instills hard work ethic and great charisma for winning with all of his athletes across all sports. Sorry I couldn't be there to accept in person!”

Accepting the award on Maar's behalf were his parents, Bob and Jill, who received the honour from Aurora Sports Hall of Fame member Alan Dean.

“From young ages, both of our sons Ryan and Stephen have benefited from the high-quality sports programs offered here in Aurora,” said his mother. “The community support of athletics in Aurora is a very important cornerstone for the development of the athletes that call Aurora home.”

A graduate of Bill Crothers Secondary School, the 24-year old Maar is preparing for his first season playing for Dinamo Moscow in the Russian Super League, his fourth season of professional volleyball after his time at McMaster University.

Cheryl Duckworth, a longtime volunteer with the Aurora Special Olympics in sports ranging from swimming, to golf, to gymnastics, was lauded as the Sport Aurora Coach of the Year, the first time the award has been handed out.

Local piper Yunus Galgar brought his musical skills to the event for the fourth year in a row.

“I'm so absolutely proud of every single person in this room for what they achieved and accomplished,” said Aurora Mayor Tom Mrakas in closing remarks. “Character and work ethic are what will allow you to succeed, regardless of whether it's sports, business, your career, or life in general. Just remember that…I wouldn't be standing here if I didn't work to get where I was.

“I'm honoured to have the privilege to be among this crowd. Your strong focus and perseverance to your sports motivates others to get active, and become a part of Aurora's sporting community.”