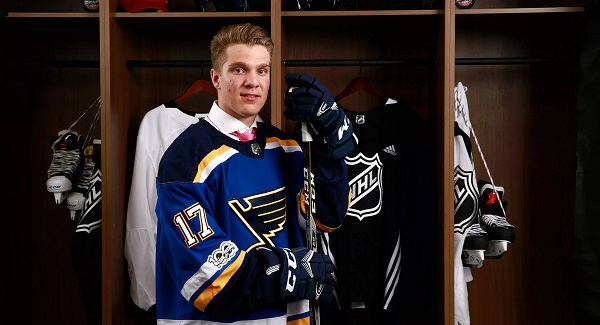 Hockey's most prized possession is coming to town.

Aurora native Robert Thomas, of the NHL's St. Louis Blues, will have his day with the Stanley Cup on July 29.

In a partnership with the Junior A Aurora Tigers organization, as well as with the Town of Aurora, Lord Stanley's mug will be open to the public just over one month after Thomas' Blues bested the Boston Bruins in the 2019 Stanley Cup final.

“Robert is very excited to bring the Cup back home and can't wait to share his special day with all those who helped him along the way,” reads a release on the Aurora Tigers official website.

“A large turnout is expected for Robert Thomas' Stanley Cup celebration, so fans are encouraged to arrive early! Food and special interactive activities will be set up for all fans to participate in!  See you July 29th!”

The festivities are set to kick off at 11 a.m. at Machell Park, scheduled to wrap up around 3 p.m. Thomas and the prized possession are set to arrive around 1 p.m.

The 20-year old St. Louis Blues prospect was honoured in October of 2018 at the Mayor's Breakfast of Champions as the 2018 Athlete of the Year, sponsored by Sport Aurora.

A staple in the York-Simcoe Express AAA minor system from a young age, the Canadian hockey world first caught a glimpse of Thomas on the gold medal winning Team Canada at the 2018 IIHF Under-20 World Championship in January.

The 2017 first-round draft pick of the St. Louis Blues capped off an incredible Ontario Hockey League season as the leading scorer of the Hamilton Bulldogs, leading to hearing his name called as the league's Most Valuable Player following the Bulldogs championship title in May of last year.

Thomas was leading the OHL's London Knights in scoring when he was traded to the Bulldogs in a blockbuster in January, setting up Hamilton for their successful run.

Though the Bulldogs were forced to give up a promising prospect, four second round draft picks, and a third-round pick to acquire the prized centre-man, the Aurora native led his team the remainder of the season in putting up four goals and 25 assists in 22 games with his new club.

He spent the better part of three OHL seasons with the Knights, catching the eye of scouts after a successful stint in the York-Simcoe Express minor system and with the St. Andrew's Saints varsity squad.

Excerpt: Hockey’s most prized possession is coming to town. Aurora native Robert Thomas, of the NHL’s St. Louis Blues, will have his day with the Stanley Cup on July 29.