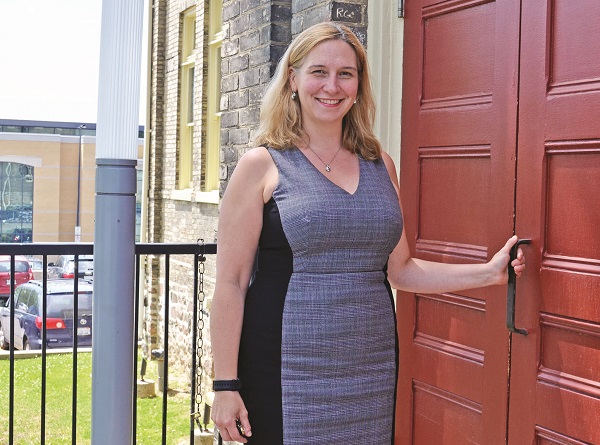 The Aurora Cultural Centre will be packing up and taking the show on the road beginning in 2020.

The popular organization, which calls the Church Street School home and recently launched its tenth anniversary season, is on the hunt for new spaces to continue programming after learning they will have to vacate the historic building while construction on Library Square takes place.

Suzanne Haines, Executive Director of the Aurora Cultural Centre, says they were hoping to be able to operate out of their long-time home for the duration of the redevelopment, but recently learned that was not possible due to accessibility concerns.

“Originally, the conversation was to see if we can stay in this space and that was the intention,” says Ms. Haines in the first of a two-part interview with The Auroran. “We tried really hard, the Town thought of a number of different ideas [of] how we can to move people through the building and how to be here while having the construction happening next door. The consideration at the end of the day was we actually can't, we won't be able to operate here.”
The issue is work that will take place to connect the Church Street School, which is also home to the Aurora Museum & Archives, to the new building approved as part of the Library Square concept. If all goes according to plan, the new building will be connected to the heritage building where the back stairs and elevator currently sit.

With this access out of the question, the only entrance and exit to the building will be through the familiar red doors facing Church Street, but this entrance is not fully accessible.

“We won't have a way of getting people who need accessibility access to the second floor or into the basement,” Ms. Haines explains. “Once the stairwell is gone, it is the same issue. Our iconic red doors are lovely, but that is our only egress. There is an egress on the lower floor, but without an elevator we don't have a way to get people out. It became an issue of whether or not you're allowed to occupy a space like that and that is not the case.”

Rather than see this as a setback, the Aurora Cultural Centre is looking at this as a net positive and is determined to keep programming going on schedule.

Temporarily vacating the space will allow the Town to carry out scheduled infrastructure upgrades to the building, including improvements to flooring, without disrupting any programming, she says, and by the time they are able to return to Church Street after an estimated two years, they will be ready to occupy a building that will serve their needs well beyond the next decade.

A temporary move, she adds, will also help fulfil a goal of the Aurora Cultural Centre's Strategic Plan to take more programming out into the wider Aurora community – but now that the move is confirmed, the big question is where?

“A lot of this has moving parts because not all the players are in place,” says Ms. Haines. “We're programmed out until August of 2020. We know in the original timeline that went forward in March that it was intended to be spring of 2020 when construction would start, but we don't know where that is or whether that is taking this part off. We're hopeful to still be here until at least June, but we don't know. We don't have a final [timeline] until that construction company really sets out that plan. I can appreciate that that information really isn't known, but all of this really started in March.

“Getting out of this space and into the community [will enable us] to create new partnerships we didn't have before in new spaces. These are new partnerships that will be with and for the community, that will continue with us. I think it can only be a positive and it feels like a win-win to me. From the live performing arts side, the concerts, from the acoustical space, there are quite a few spaces that might be great for acoustics when you don't have to amplify it. We are going to try and find, in terms of the classical music programming, looking or a space where all four of those concerts can [happen] every year. In terms of the other concerts, I am really intrigued to try and find space that might be unique for it. You have seen concerts and theatrical programming happening around Town, so they exist, it is just whether it is the best timing, fit, and space for us.

“Rest assured, these opportunities are all very exciting and will get us out there into the community, which is great.”

While locations are yet to be finalized, what is clear is their intention is to keep all programming within the boundaries of Aurora. This, she says, will be accomplished through securing “non-traditional” spaces that might actually create new opportunities for programming. This, she says, is exciting for both her and the Aurora Cultural Centre Board.

“It is about collaboration, it is about partnership, it's about growing something, where that is not always the way change can be perceived,” says Ms. Haines of the Library Square project. “Change can be scary for some, but that is not how we're viewing it here. It is exciting and rewarding for staff and we hope that people will come and find us.”

Next Week: Miss Haines shares the Aurora Cultural Centre's support and excitement for the Library Square project and outlines the opportunities the results might bring to both the Centre and the community as a whole.