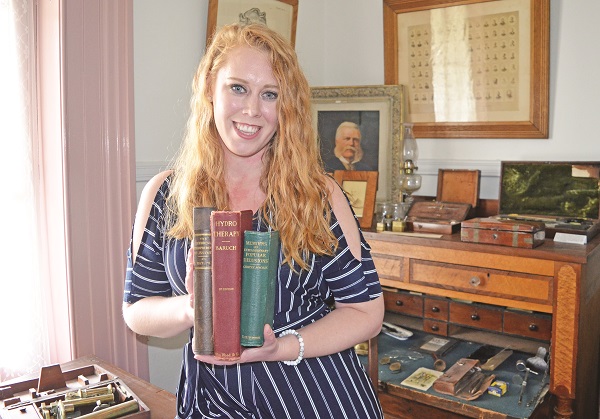 A museum is a place to learn about the past, but in learning about where we've been, we can spark a conversation about where we're going in the future, according to the Aurora Historical Society.

These are conversations the Aurora Historical Society (AHS) is hoping to inspire in their new exhibition “Mental Health: A History,” which is set to open at Hillary House National Historic Site this Saturday, May 24 in conjunction with the Canadian Mental Health Association – York & South Simcoe Chapter.

Hillary House, home also to the Koffler Museum of Medicine, has a storied medical legacy locally and curator Erika Baird says their efforts will look at the treatment of mental health in the nineteenth and twentieth centuries, including the rise of institutions, various treatments, life as a patient, and more.

“With the rising awareness of mental health, thanks to initiatives like Bell Let's Talk and celebrity spokespeople like Clara Hughes, it's easy for one to think that this is a modern problem,” says Ms. Baird. “The truth is that mental illness has plagued the human race for millennia; it just went by different terms than we use today.”

This is clearly evidenced in some of the Victorian medical books in the Koffler collection, which outline debunked methods and theories that were seen as cutting-edge at the time.

Ms. Baird's own interest in the history of mental health began before she arrived at the Aurora Historical Society while on an internship that had her looking at the history of the former Provincial Lunatic Asylum in Toronto.

This early spark was stoked into a flame as she delved deeper into Hillary House's collection and she began with a broad idea of the history of mental health; a broad topic to be sure, but one that was distilled down to something much more manageable.

“I wanted to talk about how our terminology has changed over the years,” says Ms. Baird. “'Lunatic' is not a term we would use today, along with ‘crazy and ‘insane', and how we have come to today where we have more scientific and medical terms for different disorders.”

The exhibition goes on to explore different treatments, including “moral therapy,” which was based on the idea that living a “moral and upright life” would result in a mental “shift” back to what was seen as an ideal. Music therapy, bibliotherapy (reading), and water therapy (cold water baths and douching) are also explored, as are treatments carried out in asylums that seem barbaric by today's standards.

“These asylums were always very crowded and, with the lack of supervision, they ended up being akin to forced labour as the men would go and physically build the walls for the site, the women would do a lot of the gardening and sewing, and all for no pay, but it would upkeep their maintenance. That was supposed to correct their minds.”

Through her research, Ms. Baird found local stories to bring these treatments to life, including that of Frank T. Deville, who served as Mayor of Aurora in the middle of the first decade of the twentieth century. Prior to his election, in 1888, he was a business leader who owned the Beaver Tannery on Yonge Street.

As it happens, Deville was a patient at the Provincial Lunatic Asylum. Although Ms. Baird was denied access to files to flesh out just what his diagnosis was at the time, what she found “interesting and uplifting” about his story was a surprising lack of stigma in the community.

“There wasn't a lot of evidence in the Town that that is where he was,” Ms. Baird explains. “His business partners took over for him, they sympathized with him for being ill and, when he got back, he took up the reins of the business and later even became the Mayor of Aurora. A lot of times with the stigma of that age and the ideas against mental illness, for him to have been able to get down to that facility, seek the treatment he needed and not only come home but be successful after and continue to be a leader of the community, really shows some of the strength and generosity in spirit that you don't always find in that area.”

More contemporary accounts can be found surrounding Pine Ridge, a Provincially-run mental health facility for men that was, until its closure in 1985, located in the Provincial building on the northwest corner of Yonge Street and Bloomington Road.

“To hear people's thoughts before and after the closure was particularly eye-opening,” says Ms. Baird.

As the exhibition runs through the end of September, the Aurora Historical Society is brainstorming different ways to bring their message out into the community, including workshops slated to take place at Hillary House on September 28 to coincide with Culture Days, the theme of which this year happens to be mental health, and summertime activities like yoga on the lawn to explore the link between mental and physical health.

“I want people to get a better sense of what people with mental issues have gone through in history, not only how far we've come, but how far we have yet to go,” says Ms. Baird. “Part of the reason to do an exhibit like this is to make it relevant to people today. A museum should not be just purveyors of times gone by, but stimulating conversation of modern issues and be an education space because if we're not relating to our community and making a difference, then what's the point?”

Excerpt: A museum is a place to learn about the past, but in learning about where we’ve been, we can spark a conversation about where we’re going in the future, according to the Aurora Historical Society.