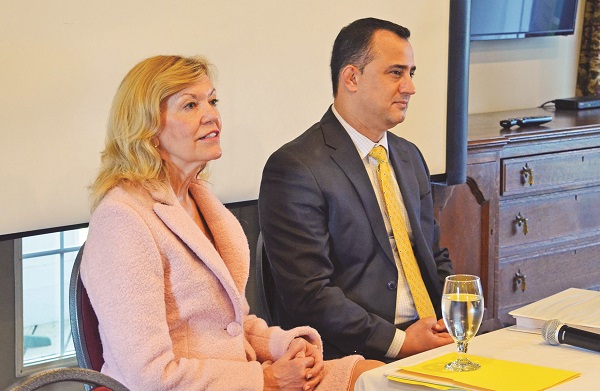 Making it easier for businesses to grow was a common thread in a breakfast talk with local MPPs Christine Elliott and Michael Parsa last week, hosted by the Aurora & Newmarket Chambers of Commerce.

Billed as a “post-budget” conversation, the packed audience at St. Andrew's Valley Golf Course peppered the local representatives with a wide range of questions touching upon autism and education funding to the relationship between the Province of Ontario and Municipal Government.

Perhaps unsurprisingly for a breakfast attended by local business people, creating an environment in which businesses can thrive was at the top of the agenda.

“One of the things I was tasked early on, directed by the Premier, was to go out and listen to small businesses all across the Province,” said Michael Parsa, MPP for Aurora-Oak Ridges-Richmond Hill. “I started travelling the Province and heard directly from businesses [on] some of the challenges they were facing and we wanted to give confidence back to job creators and those looking to invest in Ontario by putting in initiatives and incentives to give them an opportunity to say, ‘You know what? The government believes in Ontario again.”

A key factor in these consultations, he said, was employers finding there was a lack of skilled tradespeople in the workforce.

“Companies would say, ‘We're looking to grow, we can grow, we just don't have the personnel to do it,'” Mr. Parsa continued. “We have been talking a lot about this because it really is important to point out the importance of some of these trade jobs out there and to direct them as a viable career because some of them are very well-paying jobs, viable, with great benefits in the future…and we have to change the way people think about some of these jobs.”

The question of skilled labour was raised once again by an individual questioning the government's changes to the education system.

“What we do effects tomorrow, what we do today doesn't necessarily reflect today,” said one attendee. “The big issue on the horizon is September; that is when the unions at the school board are all going to start going on strike because, yes, you have added $700 million to the academic system here in Ontario, but school classroom sizes are changing, support for special needs children in these classrooms are changing. Classrooms are going to get bigger and, as a result, head counts are not the same today as they will be in September. How do you, as a government, manage the situation? It is a tough challenge you face.”

Ms. Elliott, MPP for Newmarket-Aurora, agreed it is a “very big challenge” but said consultations are continuing across the Province.

“I think it is really important to sit down and speak with teachers to find out what the biggest issues are,” she said. “In some cases financial, but in some cases it is other issues. In some cases, it is dealing with students with special needs without having other resources and that leads in the autism and other special needs questions that I know there are children with some very challenging behaviours, so I think it is a question of helping teachers and educational assistants learn how to work with children with different special needs.

“It is having more inter-ministerial groups like the group that has just been formed to consult with parents of children with autism, social services, health and education, making sure you can have a holistic view of the child and make sure they are going to be able to get the supports they need in the classrooms. I know from teachers I have spoken with that that is a significant concern for them. You need to sit down and discuss all the issues that are important to teachers; it is salary but there are many other issues too that perhaps have not been fully dealt with in the past. I think we need to sit down and talk about it and see if there is a solution that can be found.”

Excerpt: Making it easier for businesses to grow was a common thread in a breakfast talk with local MPPs Christine Elliott and Michael Parsa last week, hosted by the Aurora & Newmarket Chambers of Commerce.