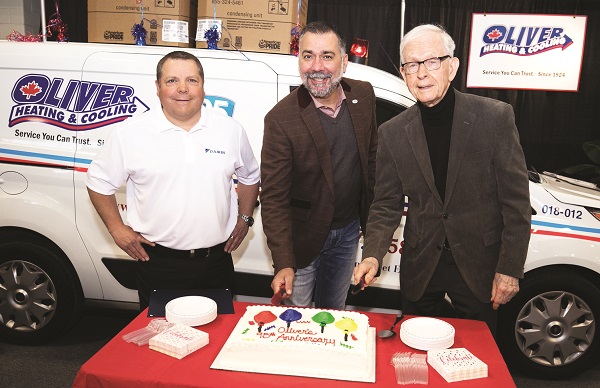 When Howard and Leta Oliver went into business in 1924, they were at the cutting edge of technology, introducing automatic home heating into the community.

They were, according to their son, historian Dr. Leslie Oliver, Aurora's first “high tech” business before the phrase was even coined – and 95 years later, they still pride themselves to be on the forefront of heating and cooling technologies.

Dr. Oliver joined the current owners of the business, Steve and Elise Desjardins, Mayor Tom Mrakas, and a host of other dignitaries to celebrate T.H. Oliver Heating & Cooling's 95th anniversary at the Aurora Home Show on Saturday afternoon.

A milestone certainly for the business and its storied history in Aurora, but it also marked a milestone for the Desjardins who purchased the business a quarter-century ago this year.

“We're really happy to be involved with this business and we want to give thanks to the community and continue the legacy of what the Oliver family started,” said Steve. “That is part of what we wanted to do from the beginning. Bringing modern technologies to local families is what it was founded on and what we have continued to do over the years.”

In a history of the company prepared for the 95th anniversary, Dr. Oliver says Howard was just a young man off the farm when he was “captivated by the newly-emerging, life-giving electro-mechanical and electro-magnetic devices of his time; in much the same way as youth today enthusiastically embrace the promise of electro-digital devices that are changing our lives in the early 21st century.”

“With a Grade 8 education, largely self-taught, his early work in high voltage electrical devices, those devices and systems that provided the spark required for internal combustion engines. The gasoline engine was the early 20th century high-tech device that made possible the farm tractor that worked Canada's agricultural lands, as well as the life-altering automobile, which would soon crowd our streets, highways and byways.

“The foundation stones of Oliver Heating & Cooling were laid in the mid-1920s when Howard was instrumental in introducing automatic home heating into the community. A landmark of the times was the pioneering work of Howard Hughes, Toronto innovator and entrepreneur (Howard Furnace & Foundries). The Howard South Wind was an iconic streamlined, modern-looking forced air oil fired furnace of the 1930s. In the ensuing years, it would replace many of Aurora's sprawling wood and coal-fired furnaces.”

Around the same time, Howard Oliver introduced electric refrigerators into Aurora homes and businesses, with air conditioning following after the Second World War.

The Howard South Wind might be more of a museum piece now, but T.H. Oliver has kept up with the times.

“We pride ourselves in our integrity, but mostly it is to bring technology and honesty to everything that we do, and to support it in the field,” said Steve. "We want to be a part of the community, not just to sell a piece of equipment and run away; we want to build long-term relationships with our customers and word-of-mouth referrals are the most important lead for us.”