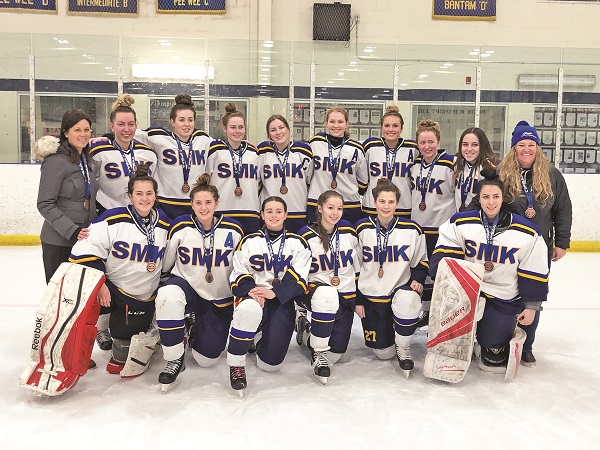 The St. Max Mustangs have landed among the best in the province in girls varsity hockey.

The York Region champion Mustangs earned a bronze medal finish at last weekend's OFSAA championship tournament, held in Midland to pit Ontario's regional champions against one another on the ice.

The Aurora squad, based at St. Maximilian Kolbe Catholic High School, were up to the task offensively from the get-go, posting a 6 – 4 win over St. Peter's of Barrie in the opening game of the round robin, also besting Ancaster's Bishop Tonnos School 6 – 2 to advance to the quarterfinal matchup.

There they met St. Peter's of Peterborough, the winners of the Group D division, advancing to the semifinal round by way of a 4 – 1 final.

London's Medway High School was the next opponent, the winners of the last two OFSAA championships. St. Max finally met their match in a 3 – 1 loss, sending the Mustangs to the bronze medal game versus Mississauga's Mount Carmel.

Determined to respond from their finals elimination, Lara Jorgensen, Meghan Anderton, Jacey Dane, and Julia Cuccia each found the back of the net to secure the bronze for the Mustangs in a 4 – 1 victory. Erynn Visser was between the pipes for the win.

“Every girl on the team stepped up and played their hearts out and exce0eded all expectations to achieve the success they did at this championship,” said head coach Kate Treacy, who pointed out the senior leadership of team captains Dane, Jayden Thompson, and assistant captain Melissa More, commending their “exceptional hockey throughout the final tournament.”

Both Thompson and Dane are moving out east to play at the collegiate level next season, with Thompson heading to Nova Scotia to compete with the St. Francis Xavier X-Women, and Dane suiting up for the St. Thomas University Tommies in New Brunswick.

The Mustangs booked their ticket to the provincial championship via their fourth-straight YRAA title over Stouffville High School in early March.

Excerpt: The St. Max Mustangs have landed among the best in the province in girls varsity hockey.