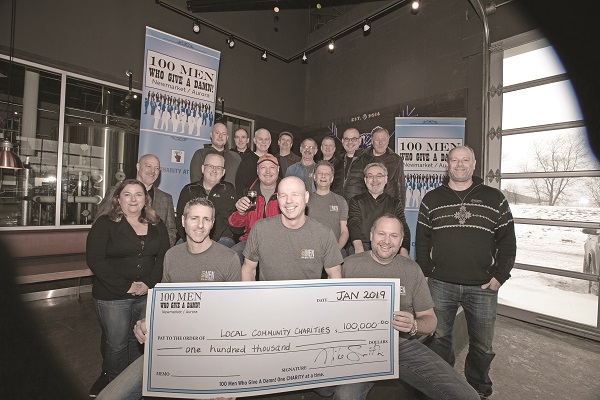 By Brock Weir By their own admission, they are not a group of guys who want to sit around “and talk about their feelings”; instead, they want to get in and get it done in just a few minutes – and leave a lasting impact on the community in the process. 100 Men Who Give A Damn, an off-shoot of 100 Women Who Care, is now marking its third anniversary in Aurora and Newmarket, having raised upwards of $85,000 for a number of worthy community non-profits in just over ten meetings. The principle is simple: a group of guys get together once a quarter for an hour-long meeting. They're required to come with just two things: $100 and an open mind. At each meeting, members are able to nominate groups and charities that have caught their eye and three are drawn from a hat. Representatives from each of the three charities are then invited to the next meeting to make a pitch and tell members how they would use the money and then, at the end, a vote is taken and the money is handed over. “We're coming up to our third anniversary, which I am pretty excited about because we started from nothing in the sense that it was just my personal network,” says Mike Smith, co-founder of 100 Men Who Give A Damn Aurora-Newmarket. “I fielded the question, is this something that would resonate and speak to people?” In answering that question, the numbers speak for themselves. From that humble beginning, the group has now exceeded its title, boasting 150 members who regularly raise more than $10,000 each time they get together. Recipients are varied and include Rose of Sharon Services for Young Mothers, 360 Kids, which provides myriad services for homeless youth in York Region, Bridgenorth, which offers help and resources to young people in York Region looking to get out of the sex trade, Blue Door Shelters and much more. In addition to being a chance to get back, it is a learning experience for many of the men who come out to the meetings, adds Mr. Smith. “I didn't know about Bridgenorth, which extricates and supports to help young adults get out of the sex trade in Newmarket and Aurora, and I think those are eye-openers,” he says. “When you hear presentations of what advocates and spokespeople bring to the table, it's a shocker. We never have a conversation with somebody after a meeting saying, ‘Yeah, they didn't deserve it.' What I do hear, more often than not, is ‘I had no idea what happens out on the streets in our neighbourhood.' People can relate to the things that are close to home, the things that could potentially affect their family or their kids, parents and friends. “Most of our members didn't know that some of these existed in our community. All they knew were the big charities like Southlake, which I have been a very strong supporter of, and Easter Seals. They know of these organizations, but the little grassroots ones like some of the ones that have been nominated, they get a chance to shine and tell their story, tell them what makes them different in our group of 100 Men.” At each meeting, new members are given the chance to tell why they do indeed “give a damn” and why they support giving back. It's all done and wrapped up within the hour, notes Mr. Smith, which is a big selling point for busy guys on the go. “People like that we respect people's time, it's non-denominational, a non-political organization, there are no membership fees and we get it done,” he says. “We ask people to commit to a year, which is only four meetings. If they can't make it, all of our members know that they can go online and donate, or they can send their money in with their wingman. By and large, that is catching on and our numbers are slowly creeping up in terms of how much we raise every quarter. “This group has been very rewarding and I've learned a lot. Many of these charities rely on the $10,000 we provide to them. It keeps their lights on. Most of the them are volunteers and they maybe have only one or two paid staff. This is very grassroots and it is a real privilege for us to be able to be a conduit to help educate our community about people who are less fortunate than us.” 100 Men Who Give A Damn meets next on this Thursday, March 7 at St. Andrew's Valley Golf Course, and again on June 6, September 19 and December 5 at locations to be determined. For more information, visit the group on Facebook, or contact Mike Smith at mike@smith-rogers.com or call 416-276-3272.

Excerpt: By their own admission, they are not a group of guys who want to sit around “and talk about their feelings”; instead, they want to get in and get it done in just a few minutes – and leave a lasting impact on the community in the process.