Saints march back to gold in home MacPherson tournament 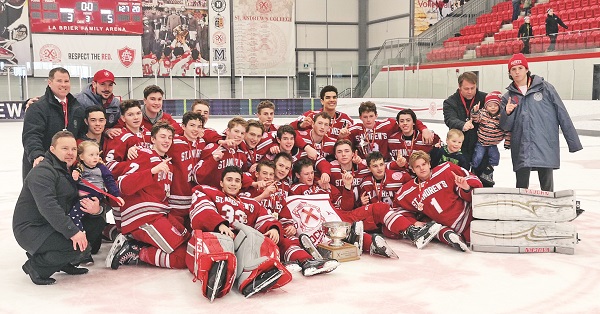 The St. Andrew's College Saints have reclaimed their throne.

It took just under 45 minutes of play for the varsity hockey Saints to put away the winning goal in the storied MacPherson tournament, a 35-year tradition hosted by the Saints.

Devlin Obrien was sent in alone against the Shattuck St. Mary's goaltender on a pass from Brendan Bowie, sending it through the five-hole with just under a minute left on the clock to clinch the title for the first time since 2014.

It was the culmination of a perfect schedule for the St. Andrew's squad, who played plenty of their action in front of a packed house on the campus' LaBrier Arena.

After opening up their preliminary round schedule with a 2 – 1 win over Shawnigan Lake School and a 5 – 2 win over Salisbury School on Friday, the Saints returned Saturday morning with a crucial 1 – 0 overtime win over Boston Advantage, with Christian MacDougall providing the dagger just 54 seconds into the extra frame.

In the final test before reaching the tournament final for the first time in two years, the Saints disposed of the German visitors Jungadler Mannheim in the semifinal, where an early third period goal from MacDougall was enough to keep their opponents at bay in a close 5 – 4 win.

Sunday's final against Shattuck St. Mary's proved to be the Saints toughest challenge of the tournament, facing a storied prep squad from Minnesota boasting alumni the likes of Sidney Crosby, Nathan MacKinnon, and Brianna Decker.

MacDougall continued his rapid scoring pace shortly after Xavier Henry opened the scoring for the home Saints, giving SAC a 2 – 0 lead. By the end of the second period, Henry had his second, while Shattuck St. Mary's found the back of the net twice themselves to take a 3 – 2 game into the third.

The visiting squad tied it at threes with just under five minutes to go, before Obrien played the hero in potting the winning goal. Matthew Stienburg added an empty netter to seal the deal.

The win is a well-earned bounce back for the Saints squad, who failed to medal in their home tournament last year for the first time since 2009. Both the 2016 and 2017 incarnations of the tournament had the Saints fall in the championship game to the CISAA's Northwood School, while the silver medal for Shattuck St. Mary's is their first time on the tournament's podium since 1995.

SAC's Xavier Henry earned honours as the tournament MVP following the trophy presentation, posting four goals and adding an assist in the tournament. SAC's Jack Agnew took home the Robin Fraser Award as the tournament's player dubbed most “gentlemanly and effective”, while goaltender Dante Fernandes and forward Christian MacDougall were named to the tournament's all-star team.

Excerpt: The St. Andrew’s College Saints have reclaimed their throne. It took just under 45 minutes of play for the varsity hockey Saints to put away the winning goal in the storied MacPherson tournament, a 35-year tradition hosted by the Saints.