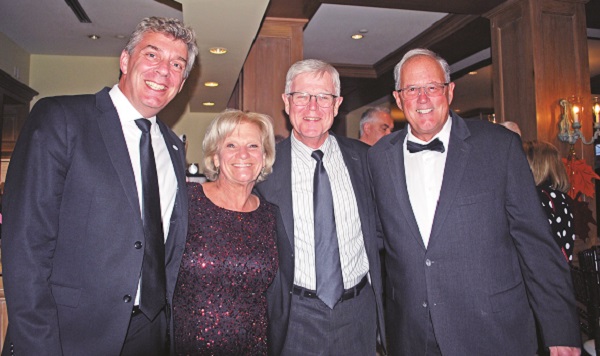 Victory was in the air on Saturday night as the Aurora Historical Society hosted their seventh annual Hillary House Ball, a sell-out event at King Valley Golf Club.

2018 marks the 100th anniversary of the signing of The Armistice, the official end of the First World War, and the Aurora Historical Society (AHS) chose Victory as the event's theme.

“We are celebrating the 100th anniversary of the signing of the Armistice, but we'd also like tonight to celebrate your own personal victories in the past year,” said Patricia Wallace, who co-chaired this year's Ball alongside Claire d'Aurore. “Victory can mean a lot of things to a lot of different people. We're celebrating our victory – celebrating a sold-out evening. We're also celebrating that local businesses realise the value of Hillary House as a gem in the heart of Aurora, as well as a draw for heritage business.”

“Did you know that according to Trip Advisor, the AHS' Hillary House is a Number One destination in Aurora for tourism?” asked Mr. Greene. “Hillary House is attracting not only Aurora residents, but also visitors from all over Ontario. Our fame has spread as a museum and as a centre for historic programming. We have become a destination for heritage tourism and it all started through the foresight of Dr. Leslie Oliver 50-plus years ago. Your support here tonight helps us maintain the Hillary House facility, its property, and also to offer heritage programs.

“The funds generated go towards education programs, senior programs, and welcoming newcomers to Aurora. Upcoming projects include restoring a coach house that has been on the property now for a few years, and it has to be [put back into shape] and made usable again, a new safe parking lot at the bottom of our property which would allow school buses and many more people to park within walking distance of Hillary House, and to restore the summer kitchen which is at the back of Hillary House now back to when it was the good old days.”

For more information on the Aurora Historical Society, including upcoming events and initiatives, visit aurorahs.com.

Excerpt: Victory was in the air on Saturday night as the Aurora Historical Society hosted their seventh annual Hillary House Ball, a sell-out event at King Valley Golf Club.