Aurora Votes 2018: Clark doesn’t shy away from being a “NIMBY” 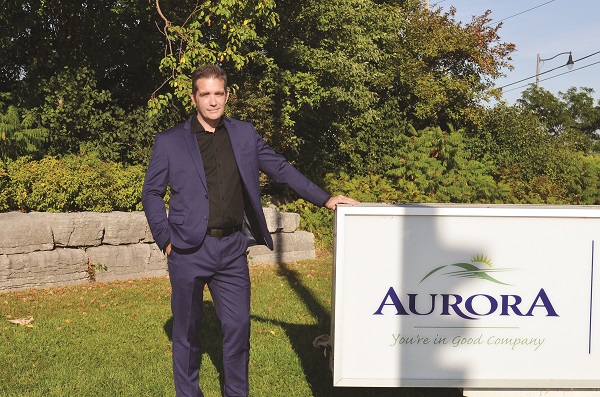 NIMBY – or “Not in My Back Yard” – is a term often thrown around as a pejorative, often against those who are opposed to a development just because it is nearby. It's a phrase that Ian Clark often hears, but he doesn't think that's necessarily a bad thing.

Those are the important issues for people across Aurora.

Mr. Clark is vying for one of six seats around the Council table in the October 22 Municipal Election. His is a familiar name on the ballot, having previously stood as one of 28 candidates in the 2014 municipal election.

Having that many candidates in the running the last time around was “exceptional”, he says, in having his voice heard amid all the “noise” but he is doubling down on those efforts now, knocking on as many doors as he can to get his ideas out there.

In the last election, Mr. Clark's campaign centred on the preservation of green space and responsible growth across the community, bringing people in to live – and shop – on Yonge Street and those are issues he says are more relevant now than ever before.

“When I talked about the preservation of green space, they started to cut down some trees on St. John's Sideroad and developing the 2C lands,” he says, “but I don't think people in Aurora had really seen the full scale of the plan. I used to ride down the street on my bike and my biggest concern was I was going to get hit in the face inches from the trees at the side of the road and there is no concern about that anymore. I think preservation is now going to be a more relevant issue for the people.”

He uses the issue of the Henderson Forest to underscore this point. While he says he knows the development proposal in question concerns a private property and those opposing the development “face an uphill battle,” the fact that those fighting to preserve the woods collected the support of more than 4,000 people bodes well for the preservation of green space.

“Now that Aurora is running out of land, we're still going to be developing land on the south side of Wellington,” he says. “If you want to live in Aurora, there's going to be increased opportunity or pressure to find beautiful places, maybe some in the old communities, find a lot with a nice house, knock it down and build your dream on it. I am sensitive to the changes in our neighbourhoods. I like the way a lot of our neighbourhoods look, particularly around Town park. If you can picture what could happen in the future, there are no measures taken by our bylaws or zoning to try and protect the way the community looks now. I would be in favour of revisiting zoning bylaws to actually enforce what we want.”

Mr. Clark has seen the changing look of Aurora first hand. He studied at St. Andrew's College between 1985 and 1988. For the past 20 years, he has called Aurora home once again, a community where he raises his two daughters.

When he threw his hat into the political arena four years ago, he was worried about how the public spending of the day would impact their future. Plans for the Joint Operations Centre and the expansion of the Aurora Family Leisure Complex were well underway, he notes, and, since then, those costs have “ballooned.”

“I thought we had a real spending problem, so I was going to run,” he says. “I am not sure those problems have disappeared today.”

The development of Library Square, for instance, is an issue he says is setting off alarm bells. While he says he is “100 per cent in favour” of building an extension, complete with theatre, onto the Church Street School, he has many doubts about the construction of Library Square itself between the School and the Aurora Public Library.

“I am not sure that it is going to give back to the community the same about that is being spent on it,” he says, “[along with] the fact it is removing parking opportunities for the Library and moving them further away. A lot of users are mothers with small children, and you have senior citizens coming to use the library…[and they] will be walking further to try to get inside. I don't really see that…enhancing the experience of anyone who is coming to the Library.”

He has similar reservations about the renovations of the historic Aurora Armoury and using the lion's share of Aurora's Hydro Reserves to complete both projects.

Council, he adds, has also been too hasty voting for using the Hallmark Lands on Industrial Parkway South for the construction of two baseball diamonds. Mr. Clark says he doesn't believe it is right to convert employment lands for recreational use.

“I don't believe it is responsible,” he says. “When we run out of land, there is always going to be pressure to move the property back into job creating and that is the right thing to do. It hurts me to say this because I am an advocate for facilities and strongly believe in providing fitness and sporting opportunities, but not there. Recreational [use] versus someone having the opportunity to put food on the table, you have to side with giving someone an opportunity.

“I don't think you should sell (the land), just hold onto it and wait. There is no reason to use it. It is increasing in value by more than the proposed taxes that can be returned. There is no down side, just wait for that opportunity.”

As he looks ahead to October 22, Mr. Clark says it is important that each voter take a close look at what each candidate offers. He is, for instance, in favour of keeping the current “at-large” system at Council because he believes Council would otherwise lose a diversity of voices at the table. As a dad, he says he looks at issues through a lens of how they will impact kids, particularly when it comes to traffic and safety.

But, with that being said, that's not the only lens he thinks one should consider.

“There is a misconception that if you care about environmental issues that somehow you're not equipped to deal with economic issues,” he contends. “It seems that that is the conception. I would like to say that is not the case. I actually see trying to preserve green areas that have been around our Town makes Aurora a more attractive place to do business.”

Excerpt: NIMBY – or “Not in My Back Yard” – is a term often thrown around as a pejorative, often against those who are opposed to a development just because it is nearby, but Ian Clark says he doesn’t think that’s necessarily a bad thing.