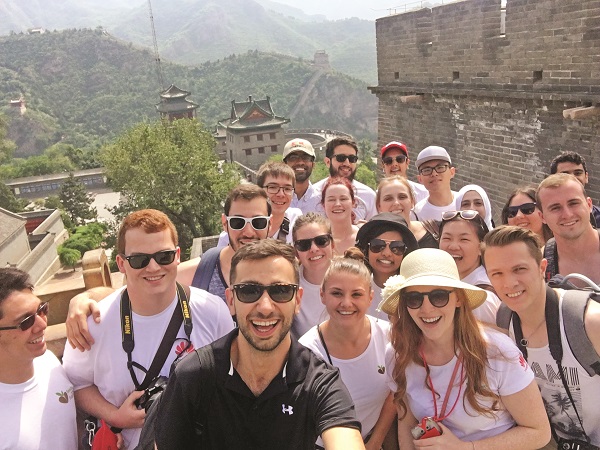 Next month, Colin Armstrong will walk through the doors of Google's California Headquarters.

It is familiar terrain for the Aurora native, who recently graduated from the University of Waterloo, but this time will be different: He's going into the Googleplex as a full-time employee.

After two internships with the web giant, he is returning – but armed with some newfound inspiration he picked up recently in China, participating in HUAWEI's Seeds for the Future program.

This year, Seeds for the Future brought together 20 engineering students from across Canada to travel to China on a work study program. It is designed to be an opportunity to experience significant advancements taking place right now in China's technology industry while, at the same time, fostering links between Canada and China “to promote a greater understanding of career opportunities” in the telecommunications sector.

“As an avid traveller, I thought this was a fantastic opportunity,” Mr. Armstrong tells The Auroran. “The opportunity to travel and learn a lot about tech was a perfect match. I have worked several different jobs in technology, and software engineering specifically, and the fact that a big focus on the trip was to learn more about telecommunications and seeing the actual innovation HUAWEI is working on I thought would be a huge benefit to my overall career.

This career took root as a student first at Cardinal Carter Catholic High School and then Aurora High School where he began teaching himself programming. This work landed him a job at a local computer repair store, performing basic tasks like removing viruses from personal computers, but it all added up. There was a lot of free time on the job and he took advantage of it – reading more about web development, software engineering, and general technology.

“It made me realise the fact there were so many resources available and such a low barrier to entry,” he says. “Anyone could Google search how to build a website and be up and running in 30 minutes to an hour. That made me realise I was missing out on an entire world I never really thought of before.”

Soon, he began learning how to build websites and apps. Launching the finished products out into the world, he got a charge seeing his products in the hands of actual users and that was when he decided this was the career for him.

Getting the products into users' hands was the top priority and by the time high school was over, he had worked on developing the first cloud-based wallet for Bitcoin.

He challenged himself to continue learning, launching, and developing.

From there, he was accepted into the University of Waterloo, taking on a number of co-op placements, including opportunities in Silicon Valley.

“It was very fulfilling because I was working as part of a team, constantly challenging myself day after day and I really liked waking up in the morning and actually getting to work on these interesting things,” says Mr. Armstrong. “I continued on with a couple of other co-ops in California and that reinforced that I am absolutely happy with my choice of what I want to do with my life.”

The recent trip to China, however, opened up new horizons on that career path.

He was particularly interested with the work HUAWEI is doing with 5G technology.

If you're travelling, you have probably seen symbols for 3G and 4G pop up on your phones. 5G takes things to the next generation with significantly increased capacity and speed.

“It allows two cars to communicate in millisecond frequency whereas with the technology we have now, that is not possible at all,” he says. “In terms of self-driving cars and those types of things, the things I saw in China firsthand made me realise that these applications are much more real than what I had imagined before. It also allows things like Virtual Reality and Augmented Reality to exist way easier than what current technology would dictate.”

When he gets to Google next month, there is still a lot to learn, he says, and he is looking forward to soaking it all in at such an established company. His previous internships with the company were as part of a 30 person team working on interactive features for Google Search, as well as working on voting platforms for “Idol” television franchises around the world.

“The system for Indonesia's Got Talent launched successfully and we had over 100,000 users in the first couple of weeks,” he says.

For those who might be preparing to start off in a similar way as him, learning programming bit by bit over a few stolen moments in high school, Mr. Armstrong encourages youth not to listen to “naysayers” who doubt the career possibilities computers and technology offer.

“When I applied to that very first job in high school, a lot of people said to me, ‘Colin, you're not going to get this. They want older people. Even my own parents said, ‘Please don't be disappointed if you don't get this.' But regardless, I always knew what I was capable of, I always knew what I was passionate about, so I just disregarded them and went for it. Don't let anyone put you down, and just continue doing what you're passionate about.

“Actually teaching yourself how to build it and actually building it is by far the most important thing you can do – and that goes hand in hand with not letting the naysayers bring you down. I am sure a lot of [people will] find themselves with an idea for something and people telling them it is not feasible, it already exists, or some company is already doing that. But, the majority of start-ups that are successful right now, people have told them the exact same thing: the difference between them and the failures is they just disregarded those naysayers, went for it and took the opportunity.”

Excerpt: Next month, Colin Armstrong will walk through the doors of Google’s California Headquarters. It is familiar terrain for the Aurora native, who recently graduated from the University of Waterloo, but this time will be different: He’s going into the Googleplex as a full-time employee.