Dozens plant tulips in the name of Canadian-Dutch friendship 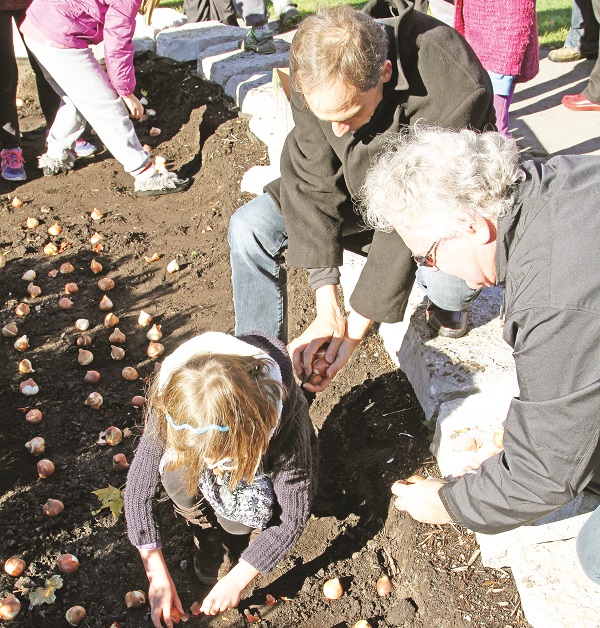 Saturday's cold snap wasn't enough to keep Aurora's Cora Van De Beek away from coming out to the Cenotaph to plant a tulip or two.

As a child whose parents emigrated to Canada from the Netherlands with three children in tow, before adding 12 more to their brood once here, memories passed down to her from her mother underscored the importance of getting out to participate in the dedication of Aurora's new Friendship Garden, one of 140 new gardens rolling out across the country, to commemorate the 70th anniversary of Canadian troops liberating the Netherlands at the end of the Second World War.

“My mother always said this was the best county in the whole world,” said Ms. Van De Beek. “We were so fortunate the Canadians came and brought food to Holland because my parents were starving. My mom's brother was so hungry he couldn't even walk straight. My mom just said [liberation] was the best day of her whole life.

“It is a privilege to be here because Canada came to us. Now, we have these beautiful tulips that are going to come in the spring and it brings us hope again.”

Ms. Van De Beek was one of two Dutch-Canadians invited to bring up the tricolour flag of The Netherlands following the Royal Canadian Legion Colour Guard. She was joined by Anne Mol, an Aurora resident who came to Canada from the Netherlands with her parents in 1959.

“I might not have been here if the Canadians hadn't come to liberate Holland, and I am very thankful,” she said.

Ms. Mol was able to convey her thanks in person to 96-year-old veteran Albert Arcand, who was one of the first members of the crowd invited to place a bulb in the new garden.

“It is very touching,” said Mr. Arcand, who turns 97 next month, after serving in the Royal Canadian Air Force during the Second World War, and later with the Army serving in Korea, Vietnam and Laos on peacekeeping missions.

The Town of Aurora was named one of 140 recipients of hundreds of thousands of tulip bulbs through the Dutch-Canadian Friendship Tulip gardens project, an initiative of the Canadian Garden Council, to celebrate the unique relationship between Canada and the Netherlands, a relationship that was forged during the Second World War.

Not only was Canada instrumental in the liberation of The Netherlands at the end of the conflict, Canada provided a home for the exiled Dutch Princess (later Queen) Julianna and her daughters, including the future Queen Beatrix. During their time in Ottawa, Princess Juliana gave birth to her third daughter, Princess Margriet, in a room at Ottawa General Hospital that was declared Dutch soil to ensure she was born on native ground.

Since then, the Netherlands has gifted Canada with 100,000 tulip bulbs each year to foster this relationship.

This was a relationship highlighted at Saturday's ceremony by Mayor Geoff Dawe.

“Aurora is very fortunate to be part of this symbolic renewal,” said Mayor Dawe of the springtime blooms, over 1 million of which will form the colourful thread of Canada's Tulip Route. “This Friendship Garden is a representation of loyalty and kindness and an appreciation of our history and the role of the Canadian Soldier in the Second World War. I look forward to seeing this continuation on a yearly basis as it reminds us of Canada's friendly and generous characteristics.”

Excerpt: Saturday’s cold snap wasn’t enough to keep Aurora’s Cora Van De Beek away from coming out to the Cenotaph to plant a tulip or two.